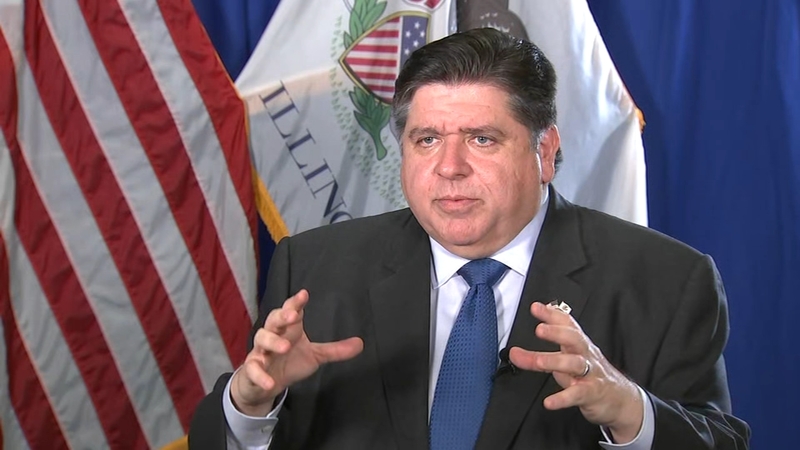 "I'm going to be making the pitch that Illinois is now front and center in the fight against climate change," the governor said.

"We want to be a location people look at to be number one on their 'hit list' for where they want to go in the United States," Pritzker said.

Illinois already has a Rivian plant building electric trucks in Normal, and plans for Lion's facility for electric busses in Joliet. Pritzker said he hopes to convince international companies and investors to bring the whole parts and assembly package together in Illinois.

Gov. JB Pritzker spoke about his statewide plan to fight climate change as the summit with President Joe Biden and world leaders kicks off in Glasgow.

His sales pitch is that Illinois has the workforce in a nationally central location. At the same time, the state has set a goal to gradually move to 100% renewable energy by the year 2050 to fight climate change. That includes eliminating all coal and natural gas power plants within 30 years, and Pritzker wants the world to know that.

"What we'd like to have is 100% renewable energy, that's the ultimate goal," the governor said, "but 100% clean energy is the more immediate goal."

Accomplishing it will take a massive investment in solar and wind power.

"We will have- first of all, electricity is going to be a lot less expensive. And electricity that we produce without burdening the environment," Pritzker said.

But not immediately. Illinois gets most of its power from nuclear plants, which are costly to operate, critical to maintain safely and, for the moment, essential to keep power on in the state.

Illinois rate payers will be paying a subsidy to keep three Elexon plants running for five more years. But as coal and gas ramps down, solar and wind farms will be taking over a number of Illinois farms now growing corn and soybeans. The governor insists all can thrive.

And some believe a wind farm could be located out on Lake Michigan. It's an idea.

"It is, and indeed there are people who are looking at that," said Pritzker. "We're not going to do it if it's bad for the environment, that's just a fact. We're going to be very careful, whatever it is that we might do."
Report a correction or typo
Related topics:
politicschicagoloopbuilding a better chicagogreenjb pritzkergovernorglobal warmingclimate change
Copyright © 2022 WLS-TV. All Rights Reserved.
BUILDING A BETTER CHICAGO
Chicago group up for award at UN Climate Conference
New data tool powering plan to equitably plant trees in Chicago
Here are some tips on how to conserve energy in your home
NASA tech at Chicago airports aim to reduce harmful carbon emissions
TOP STORIES
1 shot by Chicago police officer downtown, 2 more in custody: CPD
2 charged with murder of 8-year-old girl in Little Village: CPD
2 more COVID-based test companies investigated by IDPH, IL AG
FBI: QR code scams on the rise
Saint Anthony hospital moving to Little Village
Man released from prison after twin brother confesses to murder
Chicago Weather: Breezy, milder Thursday
Show More
Arne Duncan lays out violence plan, possibly hinting at mayoral run
Michigan governor not only original target of militia group: feds
Who is Rhone Talsma? Chicago Jeopardy! champ dethrones Amy Schneider
Brothers tortured by Jon Burge still picking up pieces of lives
Husband shares journey after losing wife in crash that killed Kobe
More TOP STORIES News