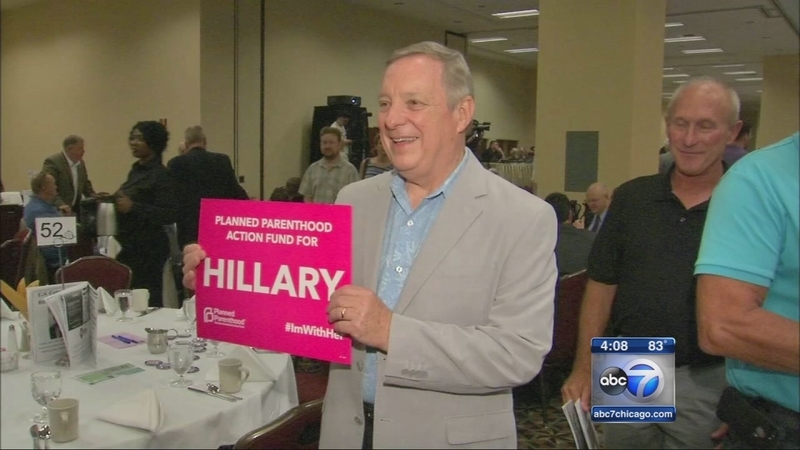 SPRINGFIELD, Ill. (WLS) -- Thursday is Democrat Day at the State Fair in Springfield and one of the state's most prominent Democrats was asked about a possible run for governor in 2018.

As the four-term U.S. Senator Dick Durbin made the rounds at the annual County Chairmen's Breakfast, he said the 2018 Illinois governor's race kept coming up.

"They want me to run, that's what they're saying," Durbin said. "I understand it. They want to replace this governor. The polls probably show something. I've never taken a poll on this, they probably show I'm doing pretty well. But you know, that isn't how we make these decisions."

"We haven't had a conversation about it but I think that it will be an improvement for the state of Illinois if he decides to do that," said Congresswoman Robin Kelly, (D-Chicago).

Rauner has indicated he will run for a second term. Durbin was first elected to Congress from Springfield in 1982 and statewide to the U.S. Senate in 1996. He was born farther downstate in East St. Louis. Today, his strongest support is north of Interstate 80.

"I'm thinking I've got a great job in Washington," Durbin said. "I want to do my job and do it right and talk about another election another day."

Durbin said he won't make a decision about whether or not to run for governor in 2018 after the November General Election.

Another Democrat who has not ruled out a run in 2018 is former Governor Pat Quinn who lost to Rauner two years ago.

At the Democratic Party's breakfast and later at its fairgrounds rally and picnic, there were hundreds of minorities including African-Americans, Latino and Asian-Americans.

"The Democratic Party speaks to what the real state of Illinois looks like," said Illinois Comptroller candidate Susanna Mendoza. "It's what's great about the state of Illinois, the diversity that makes us an awesome and incredible state."

Democrats celebrated what they say is the state's party of inclusion.

"Unfortunately the other side has shown their true colors which is a crying shame," said Naser Jahangar.

"I think that what you'll find is the combination of Trump extremism and Rauner extremism is going to be responsible for a very formidable ground game," Madison said.

Republican leaders disputed an observation that there were even fewer minorities at this year's event than attended last year. Chairman Schneider says it's a matter of reaching out to people of color.

"They want term limits, they want redistricting reform, they want jobs, they want businesses to come back," Schneider said. "We're not engaging with them enough."

Illinois' Democratic candidate for the U.S. Senate has decried what she called Republicans' "hate-filled" vision for America.

Tammy Duckworth spoke Thursday morning at the Illinois State Fair to kick off Democrats' Day. She is challenging Republican U.S. Sen. Mark Kirk in the fall. Duckworth told her fellow Democrats that their vision for America values diversity and invests in people.

Duckworth also said she wouldn't be where she is today without the safety net programs that Democrats support, like food stamps and college grants.

Duckworth seemed to target Republican presidential candidate Donald Trump when she said she didn't inherit millions but she did inherit "a sense of duty to my nation, respect for hard work and a never-give-up attitude."