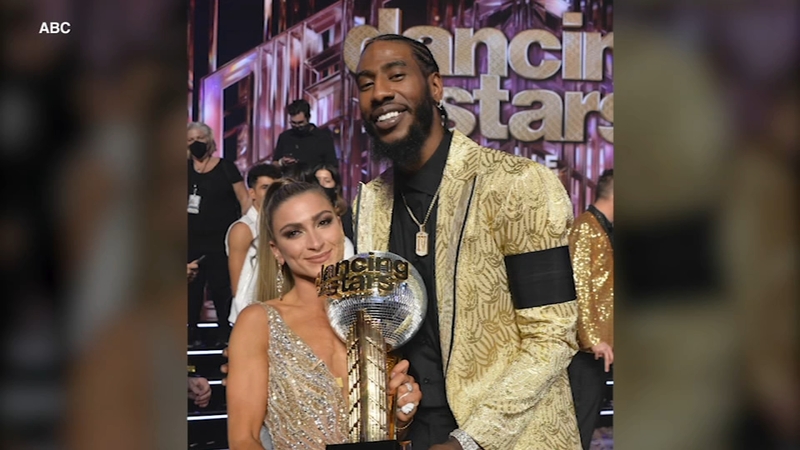 CHICAGO (WLS) -- NBA star and Oak Park native Iman Shumpert is set for his "Dancing with the Stars Live" performance, scheduled for Sunday in Rosemont.

He visited his old stomping ground before Sunday's big event, saying Oak Park and River Forest High School is truly where it all started.

"Everything seems smaller but I got some really good memories here," Shumpert said as he walked through the halls. "It sounds cheesy, but I really felt prepared for college. Like I felt prepared to go into the world and have six, seven different things I want to do."

Becoming a ballroom dancer on "Dancing with the Stars" was a step even his childhood friends didn't see coming.

"We've been dancing since we were kids. I think it's funnier to see him take it serious," said Troy Aldridge, Iman's childhood friend. "It was always about getting a girl's number or showing you've got good footwork. Now it's like, you're serious about this? You're really foot-working on national television?!"

Stunning America week after week, the NBA star would go on to become a "Dancing with the Stars" champion, winning the mirror ball trophy alongside his partner, Daniella Karagach.

Sunday, they are set to bring their show on the road in a "Dancing with the Stars Live" show at the Rosemont Theater.

"With this tour, it does an incredible job showing people's personality," Shumpert said. "There's some jewels in there. We will have fun. I have an intermission for y'all, but it's a good show. It feels good. I guarantee you it's not like the last show y'all last saw."

The stars from Shumpert's season will be there to show off some of the most popular numbers from the show.

In addition to the performance, he's also eager to show the cast what the Chicago area has to offer.

"It'll be cool for her and the rest of the cast to be able to meet my friends, meet my family, do sightseeing. I want to take a picture of the bean," Shumpert said.

His family and friends will be in the audience to cheer him on and of course, keep him grounded.