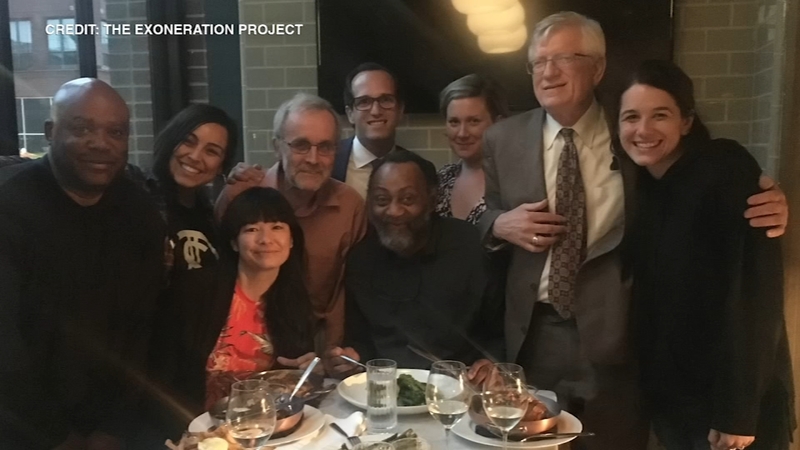 Jackie Wilson released from prison after 36 years after conviction overturned

Wilson, 57, walked out of prison shortly after 4 p.m. Friday, accompanied by his lawyers. He briefly addressed the press upon his release.

"First of all I'd like to say I'm pleased to be here to speak with you people of the press today, and I'm definitely happy with the outcome of the trial here so far, with the judge's ruling. I'm happy to be a member of society again after 36 years of incarceration for a crime I did not commit. Being a victim of one of a number of John Burge's brutalities-- oh lord, it's been a rocky ride, and I'd just like to move forward with my life without any further complications, and I'd like to make my contribution to society. Thank you," Wilson said.

Wilson was visibly overcome with emotion upon his release. With his hands behind his back, a position he's had to assume for decades, he walked out of prison a free man.

The Exoneration Project shared photos of Wilson enjoying his first meal out of prison at a restaurant in the West Loop. It was the first time he has been able to pick his own meal in a long time, and the road he faces ahead will involve other new experiences.

"He will have a psychologist that we've already reached out to. He will have assistance with job placement and life skill and technology skills, and rebuilding the life that, frankly, a lot of us take for granted," said Elliot Slosar of the Exoneration Project.

They will not disclose where he is staying, for his safety.

Hooks overturned Wilson's murder conviction and granted him a new trial June 14. Wilson claims he was tortured by disgraced former Chicago Police Commander Jon Burge until he confessed. The judge ruled Wilson's confession could not be used in future retrials.

In court Friday, Hooks reprimanded prosecutors for being unprepared in the case.

Special prosecutors have indicated that they plan to re-try Wilson's case.

The judge said Wilson's confession cannot be used in a new trial.

Jackie Wilson was released from prison Friday after spending 36 years behind bars. He says Cmdr. Jon Burge tortured him into confessing to killing two police officers.

"The abhorrence of basic rights of suspects by Mr. Burge and his underlings has been costly to taxpayers, the wrongfully convicted, worst of all, the dozens of victims and their families," Judge Hooks said on June 14.

Wilson has twice been convicted of teaming up with his now-dead brother Andrew, who prosecutors said fatally shot Officers Richard O'Brien and William Fahey during a traffic stop in 1982. His first conviction was tossed out after an appeals court ruled that he should not have been tried simultaneously with his brother. At the retrial in 1989, a jury acquitted him of Fahey's murder but convicted him of O'Brien's. He was sentenced to life in prison.

Witnesses have since said it was Andrew who shot the officers in 1982. Andrew died in prison in 2007.

The victims' families and the Chicago Police Union expressed their disappointment in the judge's decision.

"Very disappointed that a man that is responsible, who was at the scene and has admitted to being there when two honored police officers in the Chicago Police Department were murdered," said Kevin Graham, Fraternal Order of Police president.

Wilson is scheduled to appear in court August 6.

Illinois Fraternal Order of Police (FOP) State Lodge President Chris Southwood released a statement saying, "Chicago Police Officers William P. Fahey and Richard J. O'Brien were gunned down by Wilson and his brother just hours after the officers had attended the funeral of fellow officer James Doyle. Judge Hooks' decision to put Wilson back into society is like dancing on the graves of these three pubic servants and causes untold anguish to the murdered officers' families, friends and fellow officers.