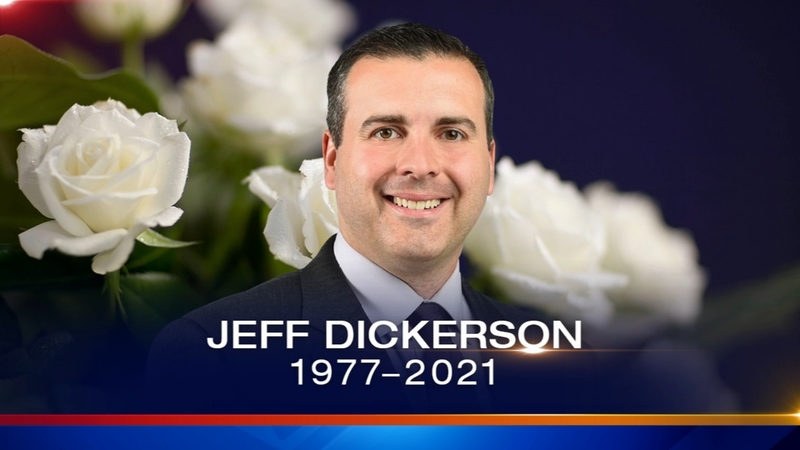 CHICAGO (WLS) -- Tributes continue to pour in for ESPN reporter Jeff Dickerson after his death from colon cancer at just 44 years old.

Dickerson covered the Chicago Bears for two decades and was also part of the ABC7 family, covering the team when they played on the road.

He will be missed by all of us at ABC7 and so many more, including his parents and 11-year-old son, Parker. Dickerson's wife Caitlin died from cancer just two years ago. A GoFundMe called "Parker's Fund" has already raised over $500,000.

Coach Nagy opened today's presser by offering his thoughts and prayers to Jeff Dickerson’s family, including his son, Parker.

"It's a tough day for all of us." pic.twitter.com/kxcYh9OKBn

Tonight I share a broken heart 💔 along with all Chicagoans about the devastating news of the passing of everyone’s friend Jeff Dickerson. One of the most positive people I have ever known. True Friend, professional and Man for others. My 🙏’s go out to his awesome son Parker ! https://t.co/ZIwZljbtVj

Tom Waddle wrote that he wished he was talking to Jeff today instead of about him, saying "we all loved him dearly." And former Loyola men's basketball coach Porter Moser tweeted that Jeff was "one of the most positive people" he has ever known.

I wish we were talking to JD today, not about him. We all loved Jeff Dickerson dearly. We will miss him terribly.

On Wednesday, ESPN 1000 devoted the entire day's programming to honoring Dickerson's memory, along with dozens of guests sharing stories of JD.

They are also drawing attention to colon cancer, which claimed JD's life at just 44 years old. Dr. Neil Perlman was diagnosed with the same cancer at 44 and after chemotherapy was able to recover. But he lost his sister Elissa to colon cancer at 42, and his mother Doris also had it. He now works to spread the word about Lynch syndrome, which is an indication of a genetic link to the disease.

"Most of the people genetically predisposed to colon cancer have Lynch syndrome and the testing has gotten so easy with mouth swabs and blood work," Perlman said.

Actor Chadwick Boseman died of colon cancer a year ago at the age of 43. The American Cancer Society and others recommend getting a colonoscopy starting at age 45. Many medical experts say if any good can come out of these tragic colon cancer deaths, it will encourage people to get tested.
SEE ALSO | Colon cancer screenings drop during COVID-19 pandemic, despite awareness after Chadwick Boseman's death

"People used to think it was something they didn't have to worry about until they were my age, but it is something you need to keep in mind all the time," said Dr. Alexander Hantel, hematology/oncology director at Edward Elmhurst Health.

"Maybe we should all be thinking about it more," DeFalco said. "And all be a little more vigilant because you see that it can happen. And that's the sad thing."