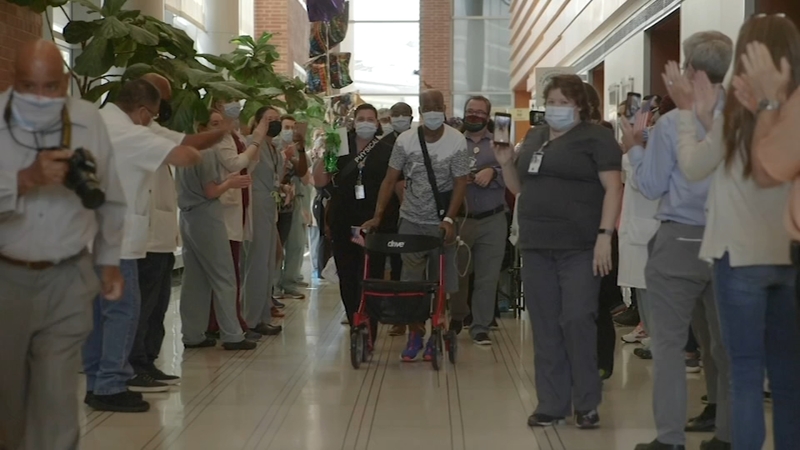 CHICAGO (WLS) -- A 42-year-old Air Force veteran has recovered from COVID-19 after a four-month battle at the Jesse Brown VA Memorial Hospital. ABC7 was there to capture the celebration as he left the hospital.

"I've been here since April 9. I walked in and woke up with tubes in me," Trinton Reaves said.

"There were many times when we didn't think he would make it through it," Tarbox said. "So we are very excited that he will be leaving, and not only leaving, but going home."

Reaves felt like he was "knocking on heaven's door" through part of his time at Jesse Brown.

"I was in a medically induced coma, I had kidney failure, lung collapse. So it was a major fight," Reaves said. "I gotta say the hardest moment were the drugs man. They had me on so many drugs. I'm still differentiating reality and some of the crazy dreams I had."

Reaves turned 42 during his time at Jesse Brown, and one of his sons turned 18 and graduated high school.

"It very much hit close to home when I saw that we had a patient in our ICU who was my age," Tarbox said about Reaves. "For that very reason alone, I've had a certain connection that has always made me feel a little closer to him."

Tarbox said that the hospital staff is enjoying a relatively quiet period and currently has zero COVID-19 patients on ventilators. But the staff is preparing for a potential second wave.

"A lot of the staff here, especially in the ICU and especially the palliative care team, have seen some really really difficult cases and a lot of people who didn't get to go home. So to be able to see someone come out the other side, especially after such a long period of time - I think it makes being here every day worth it for everyone," Powers said.

Before going home, Reaves planned to stop at McDonald's for a filet of fish. After that, he'll just be spending time with his three-year-old son.