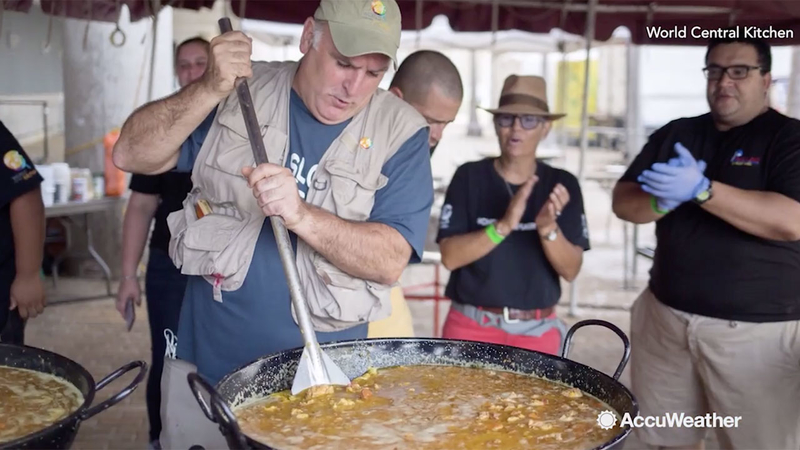 If there's one thing celebrity chef Jose Andres knows, it's that good food provides not only nourishment but also comfort in times of crisis.

Andres and his organization World Central Kitchen hit the ground running even before Hurricane Dorian struck the Bahamas earlier this week.

"We have a team of chefs and folks, and we come in and set up kitchen operations," Nate Mook, World Central Kitchen's executive director, told AccuWeather in an interview.

When any disaster strikes, be it a hurricane, earthquake or tsunami, the relief team steps out of the kitchen and onto the front lines to provide meals to those in need.

"We have already sent thousands of hot meals, thousands of sandwiches out, and we're still working to make as many meals as we can so we can feed a lot of people," one volunteer explained.

World Central Kitchen was formed in 2010 after the earthquake in Haiti, but it was during Hurricane Maria Puerto Rico that they honed their disaster response blueprint. The organization served nearly 4 million meals over several months in the aftermath of the storm.

"We really work with the resources that are on the ground, because it's the fastest way. Rather than trying to bring in a bunch of food from the outside, we tap into what's already there in a place," Mook explained, "so we're buying food from Nassau, for example, in the Bahamas."

World Central Kitchen has already served thousands of meals in the Bahamas, including ham and cheese sandwiches and tuna dishes, according to one volunteer. More help is on the way on chartered boats and helicopters loaded with supplies.

Overall, the team is prepared to serve tens of thousands of meals in the storm's wake.