Charges filed in crash that killed 5 bicyclists in Michigan 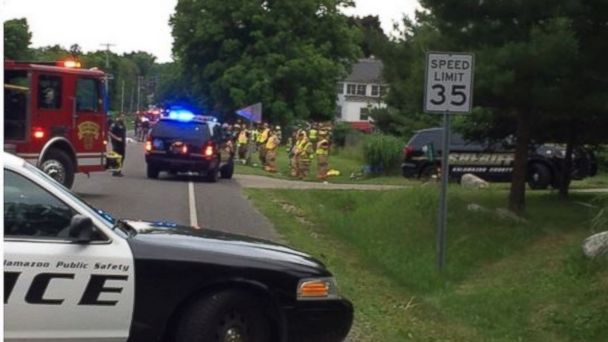 COOPER TOWNSHIP, Mich. (WLS) -- Charges have been filed in a deadly crash that killed five bicyclists in Michigan.

Prosecutors say he was behind the wheel of a pickup truck that plowed into a group of bicycle riders.

The accident happened on Tuesday just north of Kalamazoo, Michigan, in Kalamazoo County. Four others are still in the hospital, one of them is in critical condition.

The victims have been identified. Two of them were in their 70s and others attended the same church in Kalamazoo. They would often take long bike rides together.

Police confirm several witnesses called in to report the man behind the wheel of this blue pick-up was driving erratically.

The first call occurred approximately 30 minutes before a total of nine bike riders are struck from behind.

Investigators say no officers were actively pursuing the truck at the time it crashed.

"Police were looking for this blue pickup truck at the time the driver struck and killed five people," said Kalamazoo County Prosecutor Jeff Getting.

State police are also looking into whether this group, often seen on weekly rides, were cycling in a danger zone.

They were reportedly on the shoulder off the road just before the collision.

"I just notice on Tuesdays that there is a group of bicyclists with their bright outfits on, normally ten to 15 of them, that are riding on the road," said bicyclist Carolyn Burns. "Not on bike path."

"Our thoughts and prayers are with the families of the victims," county prosecutor Jeffrey Getting said Tuesday night. "I can't even begin to imagine what they're going through."

"My thoughts and prayers are with the people of Kalamazoo and particularly the cyclists and their families," Gov. Rick Snyder said in a statement. "What we already know for certain is that Michiganders as a family are in mourning today as Kalamazoo struggles to understand another senseless tragedy."

Markus Eberhard was leaving a nearby park after fishing and said he nearly was hit by the pickup. He was unable to warn the bicyclists.

"I saw a bunch of bikes hit the front of his truck and a couple of them flew," Eberhard told WOOD-TV.

The 50-year-old driver, who has yet to be identified, ran away on foot before being taken into police custody. He has not been charged yet.

Cooper Township is south of Grand Rapids and just miles from Kalamazoo.