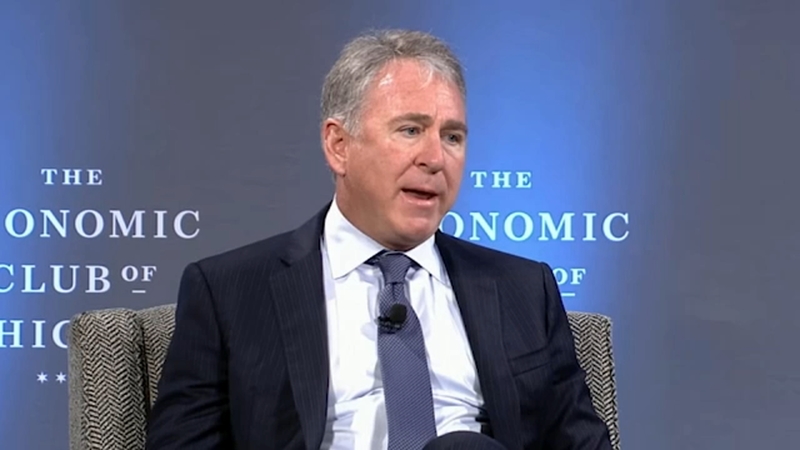 CHICAGO (WLS) -- Billionaire hedge fund manager Ken Griffin is moving his company's headquarters out of Chicago. It's the latest in a string of high-profile businesses moving their headquarters from the state and is set to leave a power vacuum in Illinois politics.

In a note to his staff Thursday, Citadel hedge fund CEO Ken Griffin announced he is moving headquarters from Chicago to Miami, Florida, saying in part, "Miami is a vibrant, growing metropolis that embodies the American Dream..."

Griffin and his family recently moved to the southern city.

The question is, what happens now?

Griffin has long been a stronghold in Illinois republican politics and has pumped $50 million into Republican candidate Richard Irvin's campaign for governor.

Ken is already an invaluable stakeholder of our community, having invested $5m towards our climate resiliency. I’m excited for Miami to gain someone who shares our innovative spirit and understands the value of community safety and quality of life.

Richard Irvin's said in part, "JB Pritzker is either in complete denial or simply refuses to acknowledge what everyone sees which is that his high-tax, pro-criminal administration is literally driving jobs and businesses out of state..."

Governor Pritzker's campaign said in response in part, "Countless companies are choosing Illinois as their home... including Kellogg, which just this week announced it is moving its largest headquarters to Illinois..."

But over the past year, Griffin has been signaling his frustration in Illinois, citing increasing crime in Chicago.

"It is a disgrace that our governor will not insert himself into the challenge of addressing crime in our city," Griffin said, addressing The Economic Club of Chicago last October.

"This is an emotional punch in the stomach for Chicago's economic development community," said Laurence Msall, Civic Federation President. "It is a big wake-up call for our city and our state that business cannot be taken for granted."

Citadel has about 1,000 employees in Illinois. Griffin's team said his firm's principals and employees have driven billions of tax dollars to the state and that he's given more than $600 million to organizations in Chicago.

"Countless companies are choosing Illinois as their home, as we continue to lead the nation in corporate relocations and had a record number of business start-ups in the past year. We will continue to welcome those businesses - including Kellogg, which just this week announced it is moving its largest headquarters to Illinois - and support emerging industries that are already creating good jobs and investing billions in Illinois, like data centers, electric vehicles and quantum computing."

"JB Pritzker is either in complete denial or simply refuses to acknowledge what everyone sees which is that his high-tax, pro-criminal administration is literally driving jobs and businesses out of state. In the last month alone, Illinois lost Boeing, Caterpillar and now Citadel. It's a clear pattern that shows no signs of ending unless we beat Pritzker in November, and I'm the only person in this race with a proven record of success to take Illinois back."

"I am excited to share with you that Citadel is moving its global headquarters to Miami. Miami is a vibrant, growing metropolis that embodies the American Dream - embracing the possibilities of what can be achieved by a community working to build a future together. I am excited to have recently moved to Miami with my family and look forward to rapidly expanding Citadel in a city so rich in diversity and abounding with energy.

Chicago will continue to be important to the future of Citadel, as many of our colleagues have deep ties to Illinois. Over the past year, however, many of our Chicago teams have asked to relocate to Miami, New York and our other offices around the world. With our new office opening at 425 Park Avenue, our expansion at 350 Park Avenue and our new headquarters opening on Brickell Bay, in the heart of Miami's booming financial district, we are in a strong position to support these transitions. We recognize that the choice of where to call home involves personal, family, school and other considerations, and we will provide comprehensive support to meet the needs of our teams.

Chicago has been a remarkable home for Citadel. I still remember the incredible civic pride and engagement when I arrived more than thirty years ago - and the outreach by business and political leaders who wanted us to succeed and be a part of the fabric of Chicago's community. That ethos served us well in building our firm - and I am proud of all that we have contributed to Chicago over the past three decades. I hope we continue to make such a meaningful impact in all the cities around the world that we call home."
Report a correction or typo
Related topics:
businesschicagofloridainvestingfinance
Copyright © 2022 WLS-TV. All Rights Reserved.
TOP STORIES
3 shot, 1 killed at WeatherTech facility; Fernwood man charged: police
Thousands gather at Trump rally in Mendon to see the former president
Stacey Baca announces decision to leave ABC7
Teen arrested after high-speed chase, threatens to kill cops: police
Bald eagle snatches Yorkie off porch: VIDEO
Hearing set for teen accused of killing, sexually assaulting girl, 10
Brian Laundrie confession letter released: 'I ended her life'
Show More
DePaul University program aims to develop more lawyers of color
Online auction scams: Don't be swindled on bids for big-ticket items
15 shot, baby among 3 killed in Chicago weekend violence, CPD says
Abortion rights supporters gather in Chicago for 2nd day after ruling
Chicago Weather: Sunny, breezy Sunday
More TOP STORIES News