WLS
By Stacey Baca
STEGER, Ill. (WLS) -- Another round of KKK recruitment flyers were found in bags along the streets weighed down with rocks in in the south suburbs on Friday.

Flyers were found earlier this week in Park Forest and Manteno.

"Not in my neighborhood," said Linda Johnson who found some of the KKK flyers.

The flyers shocked one Steger resident after another.

Janice Braun lives on Kings Road in Steger where three flyers were found on Friday. Each one was in a plastic bag with a few rocks.

"I'm really surprised. I have kids who live here and we don't need this on our street," said Braun.

Steger's police chief says a postal carrier found some flyers Tuesday. Officers followed up, and found about 10 more of these bags on the streets.

During the weekend, people in Park Forest and Manteno reported finding dozens of flyers in their neighborhoods, all pushing to join the Klu Klux Klan.

"That's been so, to me, dead for so long....and now all of a sudden, it's coming back. I was totally surprised," said life-long Steger resident Jim Piacentini.

"Before you could kind of hide it, put sheets over your face and hide yourself....but now you can come all out. You can be all out with it," said Linda Johnson.

Like the other suburbs, Steger Police do not have any leads on who may have tossed the bags around the village. Even though the flyers disturb residents, there is still a sense of respect and unity that remains intact.

"I've lived here 9 years and have never had a problem," said Braun.

"I hope everything just stays smooth and this just be something that passes by," said Larry Johnson.

Like Park Forest and Manteno, the police chief said if they find the person responsible for distributing the flyers around the village, they consider it a littering violation.
Related topics:
stegerkkk
Copyright © 2020 WLS-TV. All Rights Reserved.
RELATED 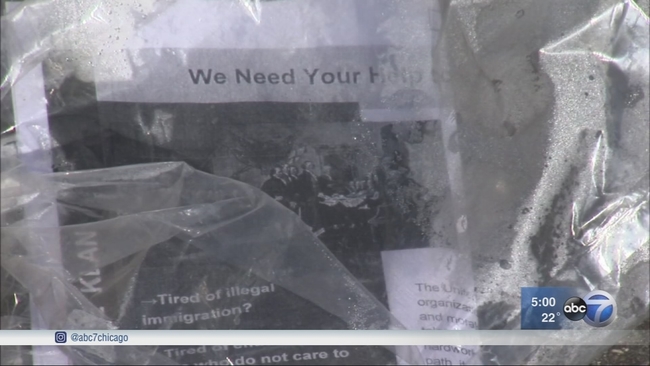