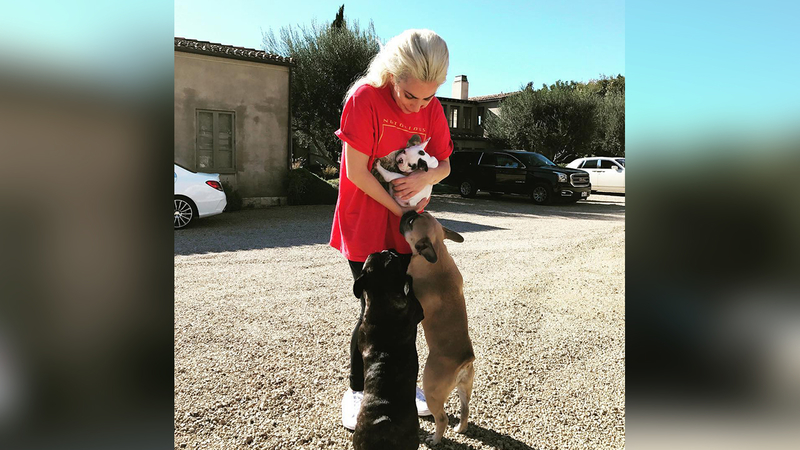 LOS ANGELES -- A gunman shot and wounded a man who was walking dogs owned by Lady Gaga on Wednesday night in Hollywood, stealing two of the singer's French bulldogs and prompting a search by Los Angeles police.

In the aftermath of the shooting, Lady Gaga offered a $500,000 reward for the dogs' safe return, "no questions asked."

The victim, a man in his 30s, was walking his dogs when the shooting happened around 9:40 p.m. in the 1500 block of North Sierra Bonita Avenue, according to the Los Angeles Police Department.

Paramedics arrived to the scene and rushed the man to the hospital. His condition was not immediately known, but he appeared to be alert and talking to first responders.

While the victim was being treated on the sidewalk, he was cradling a third dog close to him, helicopter video showed. Another man was later seen removing the dog from the victim's arms to comfort it.

Police said the suspect or suspects fled the scene, possibly in a white Nissan vehicle. A detailed description of the shooter was not available.

An LAPD spokesperson on Thursday said investigators have been unable to speak with Lady Gaga or her representatives to independently confirm that the dogs are owned by the singer.

The spokesperson noted that French bulldogs are currently in high demand and are a very valuable breed. Other thefts of French bulldogs have been reported recently in Los Angeles and it was unlikely that Lady Gaga was specifically targeted, police said.

Anyone with information about the whereabouts of the singer's dogs is asked to email KojiandGustav@gmail.com.

The owner of five puppies said his family was devastated after discovering their bulldogs were gone Monday afternoon.