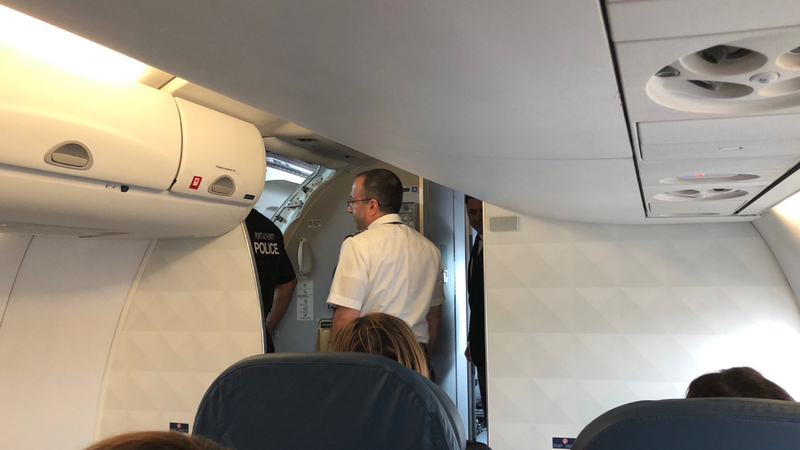 NEW YORK CITY -- There was a disturbance aboard a New York City-bound flight Friday, and a passenger tells Eyewitness News that a suicidal woman tried to open the plane door as it descended into LaGuardia Airport.

The Republic Airways-operated Delta flight originated in Raleigh, North Carolina, and touched down without incident, but it was met on the runway by law enforcement personnel, WABC reported.

Stacy Herbert posted about the incident on Twitter, writing, "A young woman in perhaps her early twenties became suicidal and tried to open the door of plane as we descended into LGA. Her father pulled her from door. She was screaming her head off that she needed to open the door and die. I wasn't scared as I knew the door could not be opened but her shrieks were terrifying. And she was sitting behind us so when she was pulled back to her seat it was awful to see her suicidal distress."

Authorities said the passenger made comments about wanted to take her own life and was acting in a manner that could have been a danger to herself and others and had to be restrained.

"She appeared suicidal and she was sitting only inches from me, screaming her head off," Herbert told Eyewitness News in a Twitter DM. "She was screaming about wanting to die."

In audio broadcasted on liveatc.net from LaGuardia's air traffic control, the pilot tells the tower that there's an emergency on board.

"We just had a disturbed, mentally disturbed passenger trying to open the forward door," the pilot says. "Everything is under control now. We gonna be taxiing to the gate."

No injuries were reported, and the passenger was removed from the plane.

The 20-year-old woman taken to Lenox Hill Hospital for evaluation, and Port Authority police took statements from the passengers.

Republic Airways would not confirm the incident, other than to issue a statement, reading, in part, "We're aware of the social media report related to the flight and are looking into it, but what I can tell you now is that the flight landed uneventfully and proceeded to its gate."