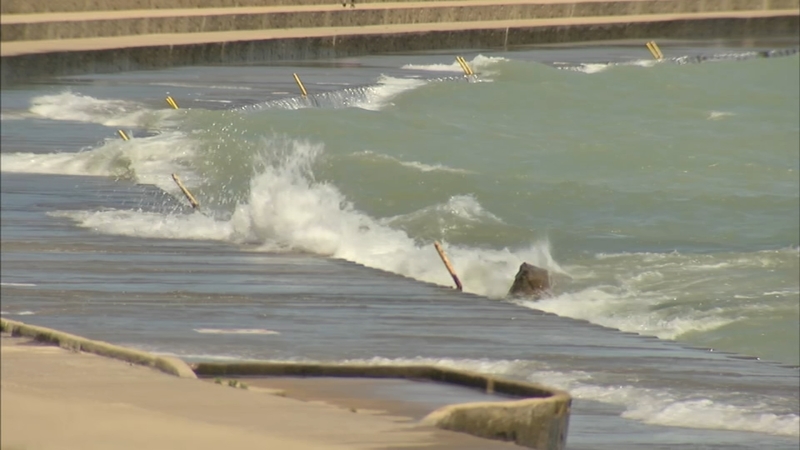 CHICAGO (WLS) -- A recovery mission resumed Tuesday in the search for a 15-year-old boy missing in Lake Michigan who disappeared while swimming at Diversey Harbor.

The teenager is presumed drowned. Authorities said he went into the lake near Diversey Harbor at about 5 p.m. with three other friends and never came out. Instead he was swept away from shore by the incredibly high waves.

The teenager was out swimming with "a group of young gentlemen," according to a Chicago Fire Department official. "He got swept off shore, and was not able to get back in to shore."

Even under the best conditions, the lake is still a very dangerous.

Both the Chicago Fire and Police Marine Units urged people to stay out of the water, and emphasized that if it's dangerous for their divers, it is dangerous for everyone.

A Lakeshore Flood advisory remains in effect through the afternoon and a Beach Hazard statement is in effect through Wednesday morning. .
Meanwhile, there have been 50 confirmed fatal drownings so far this year, according to The Great Lakes Surf Rescue Project.

"If you're gonna provide the access to the water, there should be rescue equipment, updated signage as well as lifeguard protection, especially when you're gonna close the beaches and push people to these dangerous spots. They're essentially getting herded to these dangerous spots."
Report a correction or typo
Related topics:
chicagolakeviewlincoln parkwater searchlake michiganchicago fire department
Copyright © 2021 WLS-TV. All Rights Reserved.
More Videos
From CNN Newsource affiliates
TOP STORIES