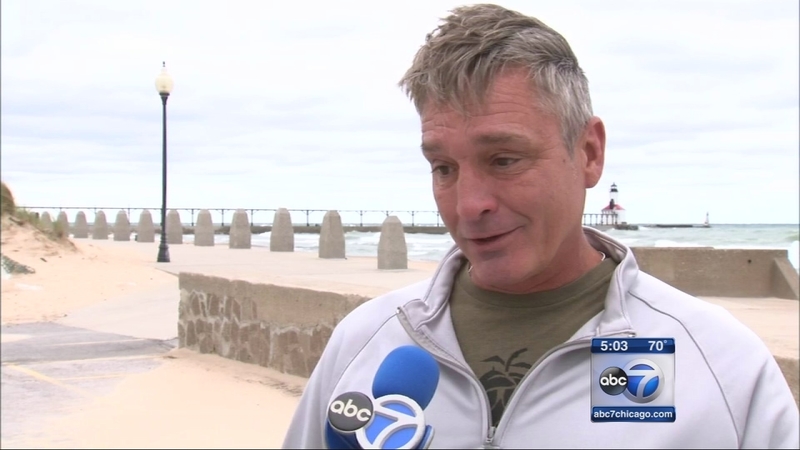 Brian Sadowski was strolling with his wife, Michelle, along the pier at the Michigan City, Ind., lighthouse when he rescued four people - one after the other. Twenty years ago, in the same place, Sadowski said he rescued a woman who was drowning.

On Monday, Sadowski's wife noticed a little boy in the water, about halfway between the boardwalk and the lighthouse on the breakside of the wall.

"When I saw the little boy go down I knew he was struggling," Michelle Sadowski said. "As soon as I told him, he's like, 'I'm going. There's no question.'"

With that, Brian Sadowski dove into waves of Lake Michigan and swam to the boy fighting the undertow.

"When he saw me, he pretty much latched on right away," Brian Sadowski said. "We both went down a couple times, had to kind of push him off of me once to get a better grip on him."

However, once he safely delivered the boy to the rocks, his wife spotted something else - another boy struggling in the water.

"I hated to do it because he's so tired, but there's another kid who's going under," Michelle Sadowski said.

After pulling two boys from a fighting undercurrent, Brian used what strength he had left to drag another man and woman up from the waves.

On Tuesday, back at the scene of four near-drownings, Brian and Michelle Sadowski said they were emotionally shaken. Brian said he was physically sore.
"I'm a little beat up," Brian said. "My ribs are a little sore. My arms are hurting a little. My feet are banged up a little bit. But it's better to be sore today than not be here today."
Related topics:
michigan cityindianalake michigan
Copyright © 2021 WLS-TV. All Rights Reserved.
TOP STORIES
Mayor Lightfoot to propose 2022 budget
Body matching description of Gabby Petito found in Grand Teton: FBI
54 shot, 9 fatally, in Chicago weekend violence
Man fatally shot by Chicago police in Englewood ID'd
Man fatally shot in Chatham with 3 injured in crash caused by shooting
Fire destroys historic Beecher church during annual Oktoberfest
Body recovered from Lake Michigan near Evanston beach ID'd
Show More
'Sunday Soul Neighbors' help each other cope during pandemic
Emmys 2021: See the list of nominees, winners
TIMELINE: What happened to Gabby Petito?
Chicago Weather: Muggy with a few showers Monday
Fields lead Bears to home opener win against Bengals
More TOP STORIES News