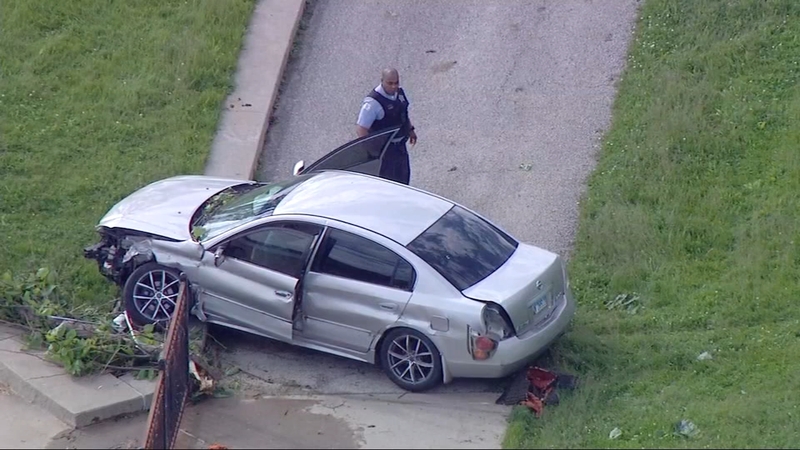 CHICAGO (WLS) -- One person was critically injured after a car left the roadway on Lake Shore Drive and crashed on the Lakefront Trail bike path on the North Side Monday morning.

The crash occurred near the bridge over the entrance to Diversey Harbor. The two right lanes of northbound Lake Shore Drive were closed as authorities investigated the crash.

The Chicago Fire Department said the driver was transported to Illinois Masonic Medical Center in very critical condition. No one on the bike path was hit.

One person was critically injured after a car reportedly crashed on the bike path near Lake Shore Drive on the North Side Monday morning.

Many said it was a miracle that no one was struck on a path that was busy with morning joggers, walkers and cyclists.

"I thought [the driver] had a heart attack or something because his body was half out the car and one hand holding the steering wheel," said Sacramento Ruiz, witness.

First on scene to help was a Loyola University nurse. Dr. Jeff Linder, who works at Northwestern Hospital, was riding his bike to work at the time and also stopped to render aid to the victim.

"We did the best we could to try to keep the victim from moving, with a big head injury we were worried about an injury to the neck," Linder said.

The crash happened at the same spot where a man was killed in a one-vehicle accident in April. Joggers and cyclists know it to be a dangerous area.

"You are very close to traffic at that point," Linder said. "The bike-pedestrian path bends away from Lake Shore Drive as you head south."

"We've encouraged the park district to look up and down the trail, and where it might be necessary to work with city and state officials and put guard rails in," said Kyle Whitehead, Active Transportation Alliance spokesperson.

But installing guard rails is easier said than done. Because Lake Shore Drive is a state road, the Chicago Park District must work with the state for logistics and funding.