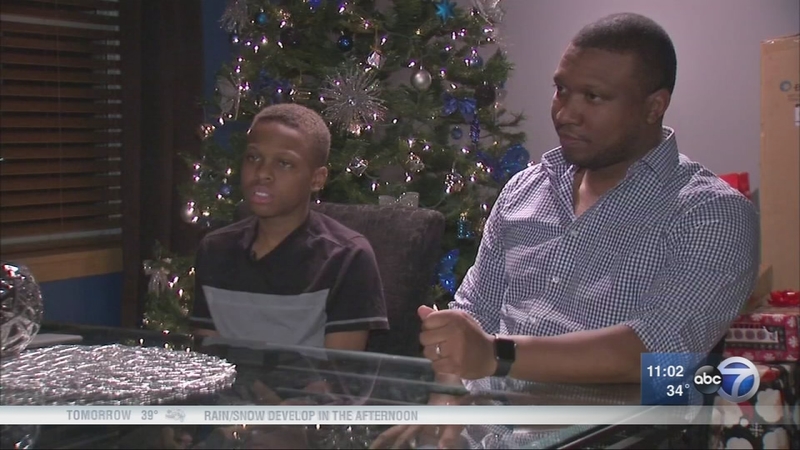 Parents of CPS student harassed by classmate meet with principal

CHICAGO (WLS) -- Parents of the classmate who called Jaylen Harris, an 8th grader at Lane Tech College Prep, the n-word repeatedly, met with Jaylen's parents and the principal of the school on Thursday to discuss the online harassment.

Jaylen, who was out sick with the flu this week, logged onto his school email system from home Monday to see a barrage of racial slurs and insults directed at him by a classmate he was working on a project with.

The n-word was used 17 times by the student, who also made comments that included, "Hey where did all the fried chicken go," and "What did God say when he made the first black man? (Expletive) I burnt one."

Another classmate also took part in the conversation, but directed his rage at the student targeting Jaylen and threatened to beat him up. After referencing the student's Jewish background, the classmate wrote "#SaveHitlet2K16."

"Today I'm finally having the chance to have a meeting with the parents involved in the incident. This whole thing started because I asked the principal for a meeting," said Jermaine Harris, Jaylen's father.

Harris said his meeting was at first denied. On Wednesday, he went to ABC7 with the emails. When we asked the school district for a comment, Harris said the principal changed his mind and scheduled a meeting with both sets of parents.

"I wanted a chance to talk to these parents, I wanted to sit down and look them in the eye, and understand what that meant to my son and what that means to me," Harris said. "So that this is something that is not tolerated in the city of Chicago."

CPS released a statement to all Lane Tech students, parents and staff on Thursday.

"This week we had an incident where three of our 8th graders wrote racial slurs to another student via a google chat for a class project. We conducted a full investigation and the offenders will receive consequences based on the Chicago Public Schools Student Code of Conduct. As a school, Lane prides itself on its amazing diversity. We do not condone and take very seriously the use of racial slurs or jokes, and students who participate in these types of behaviors will receive the appropriate consequences. We ask all of our students to remember that words matter and to join us as a united front to monitor the language we use with one another. Lane is a safe and loving environment, and we want you to know that we are always here to support our students, staff, parents, and community members."

Harris said he doesn't want the student responsible for writing those emails to be suspended or expelled, he just wants open communication.

"We are all in this together. Regardless of our skin color, the kids involved, my son, they have way more things in common than they do apart," Harris said.
Related topics:
roscoe villageexclusivechicago public schoolsracismharassmentstudents
Copyright © 2022 WLS-TV. All Rights Reserved.
TOP STORIES
Security guard hurt after confrontation at suburban Walmart: police
Some peanut butter recalled for potential salmonella
Security guard shoots man in buttocks at Millennium Park
'Absolutely terrified' teen boy dies hours after 'sextortion' scam
Wedding guest budgeting tips
Chicago mass shooting victim ID'd as father of 2, with twins on way
Chicago police warn of robberies on Near North Side
Show More
At least 1 dead, 44 injured after tornado strikes northern Michigan
Weather for Preakness could be hottest in history of race
First formula flights from Europe to arrive this weekend
3 wounded in separate shootings on South Side, Chicago police say
Dog battles mountain lion to save owner's life
More TOP STORIES News