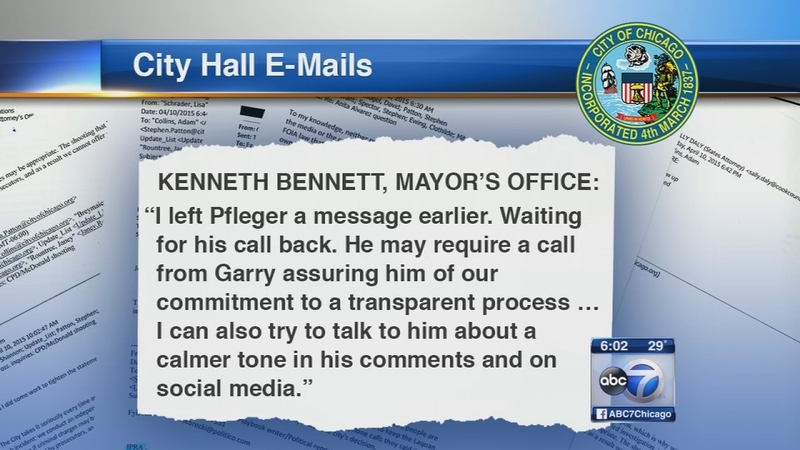 CHICAGO (WLS) -- Newly released emails exchanged among city officials in the wake of the Laquan McDonald video release in November provide an inside look at how Mayor Rahm Emanuel reached out to community leaders in hopes of quelling public response.

On Thursday, the city released thousands of emails that show much time and energy the mayor's office spent trying to keep the dashcam video under wraps. Efforts to control message did not end after it was clear the video would come out.

Minutes before releasing the McDonald video, the mayor urged calm tell reporters: "Will we use this episode and this moment to build bridges that bring us together as a city? Or will we allow it to become a way that erect barriers that tear us apart as a city?"

Already, there was simmering anger. The weekend before the release, Fr. Michael Pfleger on Facebook called for protests.

The mayor's office took note of Pfleger's call to action.

An email from Kenneth Bennett in the mayor's office read: "I left Pfleger a message earlier. Waiting for his call back. He may require a call from (CPD Superintendent) Garry (McCarthy) assuring him of our commitment to a transparent process ... I can also try to talk to him about a calmer tone in his comments and on social media."

The emails don't say if they spoke, but the next day, Pfleger told his congregation: "Sit down in the street and block the street on Michigan Avenue with civil disobedience, peacefully and say, 'You know what? Business as usual can't go on while our children are dying."

That weekend, the Rev. Jesse Jackson also was contacted by city officials. An email from Bennett read: "I spoke with Rev. Jackson ... He said our silence regarding the video has hurt us ... I'm not completely sure of the position Jackson will take."

Hours later, Jackson said publicly, "I have high regard for Mr. McCarthy as a person, but in his job, he's lost credibility. The police department is no longer credible."

Exactly one week after the release of the video, following days of protests - including on Black Friday - Supt. McCarthy was fired.

But the emails show nearly one week later, he still had access to his police department email account.

After the mayor's office put out a statement Dec. 6 saying CPD had no role in the McDonald investigation because the case had been referred to the Independent Police Review Authority. The now-unemployed McCarthy wrote sarcastically in an email: "Good time to put this out! Oh, wait. It's a week too late."

A city spokesperson said Friday the city was being transparent in releasing the emails, even releasing documents that are protected by attorney-client privilege that could have been withheld.

Several emails are heavily redacted, including written responses from Emanuel.