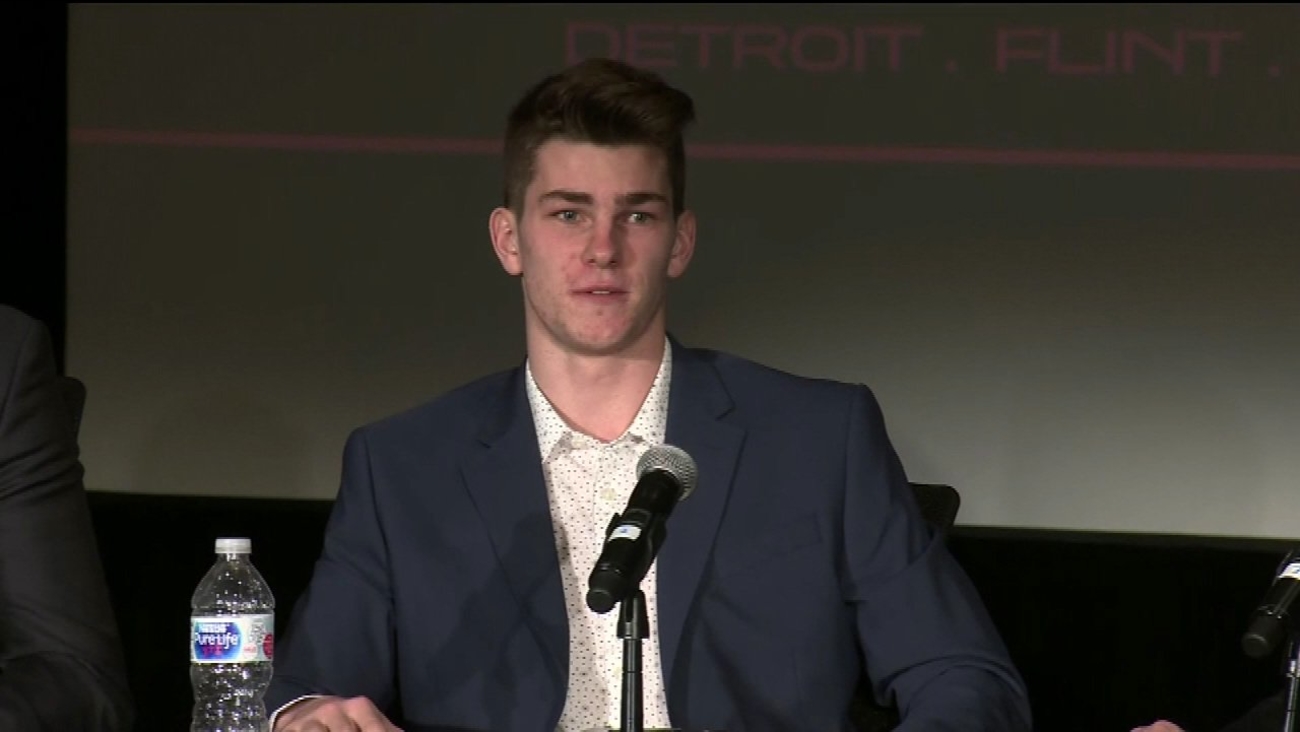 Jacob Moore went to visit Larry Nassar, a gymnastics doctor and family friend, after gymnastics practice one day in April 2016, for what he thought would be treatment for his ailing shoulder.

But in Nassar's basement, the doctor pulled down Moore's pants and administered acupuncture to his genital area, claiming that it would help his shoulder, Moore said. As he did so, Nassar spoke to another young female gymnast in the treatment room about whether she had seen a man's body part before, Moore's attorney said.

The encounter left Moore feeling "quite uncomfortable" and did nothing to help his injured shoulder, which later required surgery, Moore said in a press conference on Monday.

Moore, now a freshman gymnast at the University of Michigan, became the first man to accuse Nassar of sexual abuse when he joined a civil federal suit against Nassar and others associated with the scandal last week.

Moore, now 18, said he decided to come forward with his story after he watched his sister and nearly 200 other girls and women testify at Nassar's criminal sentencing earlier this year. No men came forward to say they were abused.

"I was inspired by my sister and everyone else in this community to come out and help bring change to what allowed this to happen," Moore said. "I don't want (other victims) to be scared to come out because of stigma that guys can't be sexually abused or taken advantage of."

Nassar pleaded guilty to criminal sexual conduct in two counties in Michigan and admitted to using his trusted medical position to sexually abuse his patients under the guise of medical treatment. He was sentenced to decades of prison time on those charges and on several child pornography charges.

Moore said Monday that he went to Nassar for treatment for his injured shoulder. But he knew that the acupuncture in his genital area was not helpful.

"I left his basement thinking that did not help at all," he said. "It's frustrating when you have an injury and thinking you're gonna get legitimate medical treatment, and you're not getting that, for sure."

The civil lawsuit against Nassar argues that the "treatment" was not medical but criminal.

"There is no known medical connection between shoulder pain which can be treated through acupuncture in the area of a male's genitalia," the suit says. "Plaintiff Jacob Moore believes the conduct of Dr. Nassar was sexual assault, battery, abuse, molestation and harassment performed by Defendant Nassar for Defendant Nassar's sexual pleasure and gratification."

Moore's sister, Kamerin, first testified in January about the abuse she says she and her brother experienced, during Nassar's criminal sentencing trial in Ingham County in Michigan. She also joined the federal civil suit.

Nassar served as the team physician for the USA Gymnastics for about two decades.

After receiving complaints about Nassar, USA Gymnastics terminated its relationship with him in the summer of 2015. Still, he continued to treat patients at Michigan State University until the Indianapolis Star reported on the allegations in August. He was arrested in November 2016.

A special prosecutor is investigating Michigan State University to determine how Nassar could have abused athletes for so long without action being taken against him.

Moore's attorney, Tom Waun, said Monday it was "egregious" that his client was abused by Nassar almost a year after USA Gymnsatics dismissed him but failed to inform other gymnasts. Moore has been a member of USA Gymnastics since 2006, and he was at the Twistars gymnastics club from 2001 through 2015.