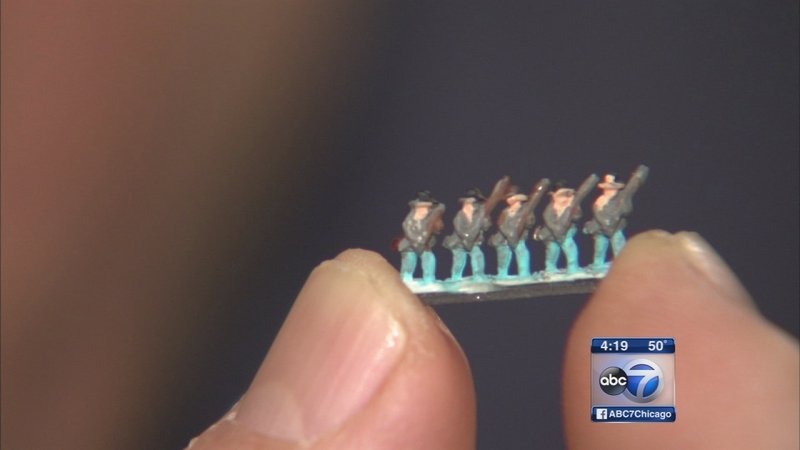 GURNEE, Ill. (WLS) -- Some of the greatest battles in history will be fought all over again - this time with miniature armies - at the Westin Hotel in Lombard. The three-day convention starts April 29 and is called "Little Wars".

This modern home in Gurnee doesn't look like a historical battlefield, but down in the basement the traditional man cave has been replaced by the history of war in miniature. This, for instance, is July 1, 1863.

"This is our edition of the first day of Gettysburg. One inch is fifty yards. Every figure on the field represents twenty men. These are five millimeters tall, about a quarter of an inch," said Steve Fratt, president, Historical Miniature Gaming Society.

There are no such things as small wars, except for here. And these are the battles Steve Fratt and Kevin Cabai fight every time they meet. They call themselves gamers, and it's something that's been going on for a long time.

"I started in grade school when I was 11 years old," Cabai said. "I'm still playing."

"I started in first grade with dad brought home some toy soldiers. I was interested in history and I put the two together and started playing games," Fratt said.

Just like in real combat, survival sometimes depends on the roll of the dice.

"Every result is based on percentage of how the equipment could perform. The dice represent the variables or the things that could go wrong with fog of war," Cabai said.

Fratt says he has more than 100,000 troops in his collection from the days of the Romans to World War II. They can't change real history, but they can play with it.

Do you remember the movie "Saving Private Ryan"? Well this is a scene from that movie: the climax. And like so many other battles here, it's very accurate.

"The accuracy. You start out at a particular time when the battle began. But from that point on, you make the decisions. You can change history. It can go in a different direction," Fratt said.