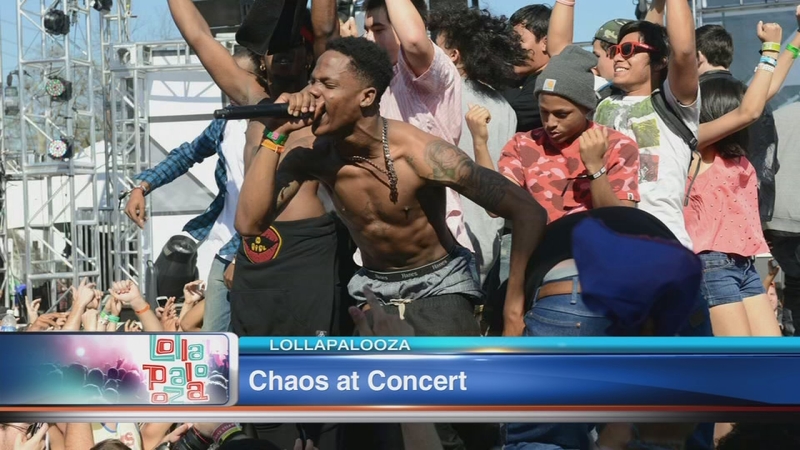 CHICAGO (WLS) -- A performer at Lollapalooza in Grant Park Saturday caused a commotion that sent fans over security barricades and resulted in a disorderly conduct charge for the singer.

Police say it started after rapper Travis Scott told people to climb over the security barricades during his Saturday afternoon performance.

Scott, whose real name is Jacques Webster, was arrested and charged with disorderly conduct when police say he tried to urge the crowd to ignore security and rush the stage.

Organizers say it could have been a dangerous situation, but security quickly got things under control and stopped Scott five minutes into his performance.

The Office of Emergency Management issued a statement saying, "The performer played one song and then began telling fans to come over the barricades. Due to the security's quick response, the situation was remedied immediately and no fans were injured. The performer fled the scene and was taken into custody a short while later. "

Police, meanwhile, say overall the number of problems at Lollapalooza has been relatively small. Of the 100.000 in attendance, there were seven arrests, 35 citations and 85 ambulance transports on the first day of the festival.

For some it's a family event. Sammy Kleinman was looking forward to Metallica.

"This is my first music festival, so far I think it's pretty good," he said.

Crews were busy all afternoon blowing up black beach balls backstage in preparation for Metallica's show Saturday night. The heavy metal band is clearly reaching out to a much broader audience than usual for this show. Organizers say a broad musical selection is the idea of the festival.

"Somebody who came to see (Paul) McCartney might see a new band they've never heard of before," said Lollapalooza marketing manager Brooke Leal. "At the same time, some of our younger fans might come and see an art like Paul McCartney or Metallica and fall in love."

Organizers are urging fans to drink plenty of fluids.

"It's a gorgeous weather, but it is warm so we encourage everybody to make sure that they're staying hydrated," said Lollapalooza marketing manager Brooke Leal. "Bring some refillable water bottles with you to the park. We've got free water filling stations throughout the park."

They also have a convenient, if expensive, way to pay for refreshments.

"Hooked up my bracelet to my credit card," said fan Richard Gutierrez. "Probably a mistake. I'll keep scanning it."

General admission tickets, multi-day passes and travel packages for the festival are sold out. The website says VIP tickets are still available, but they may be gone soon.