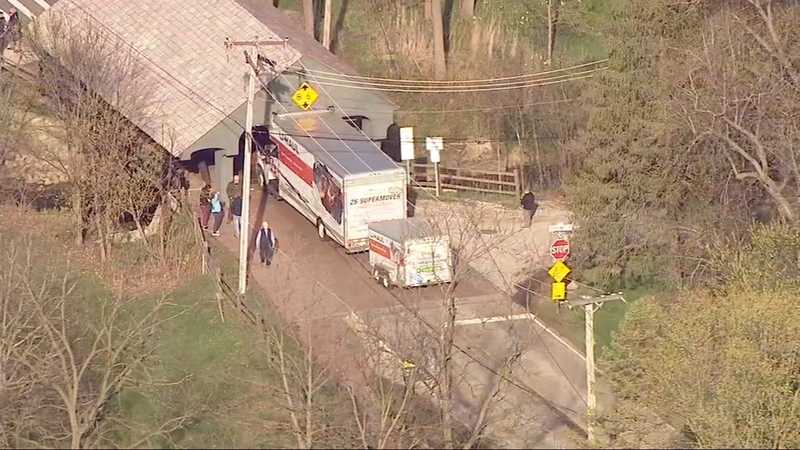 LONG GROVE, Ill. (WLS) -- A historic bridge in north suburban Long Grove has been struck again for at least the 14th time since it reopened following major repairs in August of 2020.

Chopper 7HD was over the scene where a U-Haul truck with a U-Haul trailer attached had crashed into the historic bridge. Chopper showed the top of the box truck crumpled and stuck into the bridge's roof.

For the 14th time since it reopened after repair work, a truck has crashed ito the Long Grove covered bridge.

The Lake County Sheriff's Office said the driver of the U-Haul is from Nashville, and was following his GPS and did not see the signs about height restrictions as he approached the bridge. The top of the U-Haul box struck the bottom of the covered bridge roof, and became stuck. The truck has significant damage, but the driver was not injured, the sheriff's office said.

Robert Park Coffin Road is closed to traffic around the bridge as officials work to extricate the truck. Motorists should avoid the area until it is cleared.

It was not immediately clear how much damage the bridge suffered, and village officials are on the scene to inspect the damage.

The iconic covered bridge in northwest suburban Long Grove is having a seriously rotten stroke of luck.

The 13th crash into the bridge was reported in February, when a box truck ran into the north face of the bridge cover on Robert Parker Coffin Road.

The Lake County Sheriff's Office says there have been more than a dozen reports of similar crashes since the bridge reopened last August.

After receiving a top national honor for its historic covered bridge, Long Grove residents are facing a major setback.