Emanuel: No specific deadline for Lucas Museum, but clock ticking 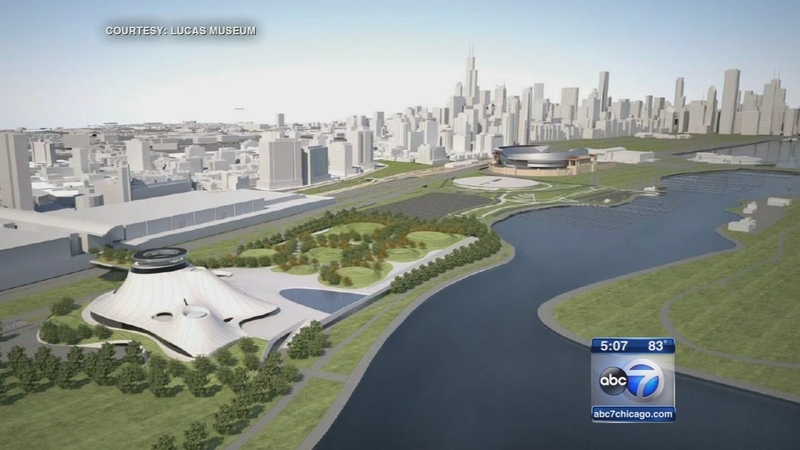 Emanuel: No deadline for Lucas Museum, but clock ticking

CHICAGO (WLS) -- There are more questions about the future of the proposed Lucas Museum in Chicago.

The group Friends of the Parks says they must agree to allow the museum to be built south of Soldier Field by the end of the day or the facility will be built in another city. But the city and museum officials say there is no deadline.

The confusion continued late Tuesday morning. The Chicago Tribune quoted a Friends of the Parks executive saying Tuesday is the deadline for the city to make a decision regarding the $743 million museum of narrative art that George and Mellody Lucas want to build on the lakefront.

But Tuesday afternoon, Mayor Rahm Emanuel, at the opening of a South Side Whole Foods store, said there is no specific deadline. However, he did say the clock is ticking.

"Time is not a friend here," Emanuel said. "Couple of years ago, San Francisco made the mistake. I don't want to see Chicago make mistakes. I want the Friends of the Parks to be the friends of the city of Chicago."

On the reported drop dead date, Lucas spokeswoman Rikeesha Phelon wrote, "That's not a timeline set by the Lucas Museum."

Friends of the Parks Executive Director Juanita Irizarry explained, "It was the city that has set today as a deadline."

The group filed suit to stop the first plan to build the museum on a Soldier Field parking lot and threatened legal action to stop an alternate site now occupied by the McCormick Place Lakeside Center.

Last week, the organization's reportedly divided board said it might soften its opposition to the lakeside plan if the Lucases would donate five percent of museum revenues to neighborhood parks.

"While they're sitting around doing different proposals and switching around and negotiating internally and making in my view outrageous demands, the Lucases are looking at other options," Emanuel said.

President of the Chicago Park District Board of Commissioners Jesse Ruiz said in a statement Tuesday, "For many months we have warned that the Friends of the Parks lawsuit could cost Chicago this cultural institution, thousands of new jobs and, ironically, new park space. I've made that clear to Friends of the Park personally. And while I haven't put a deadline for them to drop their misguided lawsuit, it is obvious that time is not on our side."

Los Angeles and San Francisco have reopened bids to locate the museum in their cities. The Lucases, who live on the West Coast, say they are listening to those offers as Chicago continues its debate.