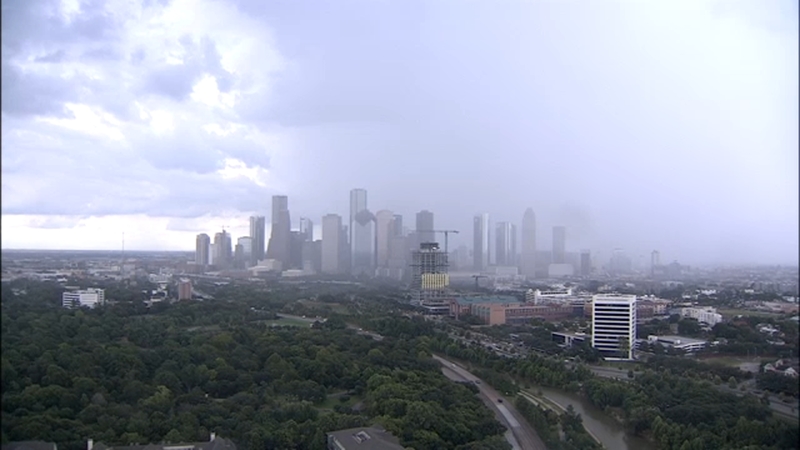 View every corner of the Houston area!

HOUSTON, Texas -- Authorities in northwest Harris County in Texas have captured Jose Gilberto Rodriguez, the suspect wanted in connection to three murders in the Houston area, according to deputies on the scene.

Jose Gilberto Rodriguez is in custody at Eldridge @ Fallbrook. He was arrested after a brief vehicle pursuit. #HouNews pic.twitter.com/yottHARuFJ

UPDATE: Rodriguez is in police custody. No other details are immediately available, but we will advise the media and public as soon as possible. #hounews

On Tuesday morning, officials say Rodriguez, 46, was spotted in a dark Nissan Sentra, a vehicle that belonged to one of the murder victims.

Rodriguez led police on a chase that started around Eldridge and Fallbrook. This was close to where the crime spree began on Foxburo Drive.

He was taken into custody at North Eldridge Parkway and Wortham Landing.

A search has been underway for Rodriguez since Monday afternoon after police identified him as the suspect in a violent crime spree around the Houston area that left two women and a man dead.

Rodriguez is a parolee who was released from prison last year. He was paroled to a half-way house.

RAW VIDEO: Eyewitness News reporter Jeff Ehling is on the scene as the suspect is caught

In a joint news conference Monday evening, Houston police and the Harris County Sheriff's Office linked Rodriguez to the murder of a man at the Mattress1One along the North Freeway near Crosstimbers, the murder of a female worker Saturday at the Mattress Firm near Willowbrook Mall, and the killing of a 62-year-old widow in Cypress last Friday.

Both agencies also connected Rodriguez to an armed home invasion on July 9 and the shooting and robbery of a METROLift driver earlier Monday. The driver is expected to recover.

Eyewitness News learned Rodriguez has convictions for burglary, attempted aggravated sex abuse, auto theft, and criminal trespassing, all since 1989. He is a registered sex offender.

Last September, Rodriguez made parole and was released from prison. In a startling revelation, police believe Rodriguez had cut off an ankle monitor that had been tracking his movements.

Last Saturday, a store manager found the body of Allie Barrow between two mattresses at the Mattress Firm on FM 1960.

A Mattress Firm employee was found dead inside the store.

Last Friday, 62-year-old Pamela Johnson was found dead in her home. Authorities say the woman's vehicle was seen being driven by Rodriguez shortly after.

He was caught on surveillance video parking the car at Willowbrook Mall. He then walked into the mall and left on the other side from where he left the car.

The memorial outside Pamela Johnson's home has grown as a break in the case is helping investigators move forward.

In the murder at Mattress1One, authorities say the victim, who was an employee of the store, was found dead in the back of the building. Officials say Rodriguez took that victim's vehicle from the scene.

It's the same car he was captured in Tuesday morning.

In the midst of the investigation, Mattress1One released a statement, expressing sympathy for the victim's friends and family:

Mattress1One is deeply saddened and would like to offer its deepest condolences to the family, friends and loved ones of its deceased associate.

On July 16th we lost a valued team member and were very saddened by the events that transpired. We are fully cooperating with all law enforcement to quickly bring justice to this matter. Out of respect for the team member, his family and the law enforcement investigation we will refrain from commenting further at this time.

Video of murder suspect getting taken into custody

Authorities say he may have been searching for another victim on Tuesday before he was arrested.

Once the chase he led authorities on ended, deputies say they could see a revolver in plain view on the passenger seat of the stolen car.

Deputies were already in the area when a homeowner off Jones Road spotted the vehicle.

The arrest ended a nerve-racking week for residents who worried the suspect's violent crime spree would find its way to their homes next.

"It is a shame that people lost their lives over this criminal, like this guy, you know, that never should have been released," said resident Dennis Lippert.

We now know that Rodriguez's parents live near the area where he was caught, and that may be why he was active in those neighborhoods.

Authorities say no part of town can be considered safe because suspected killer Jose Rodriguez has access to a car taken from a murder victim.