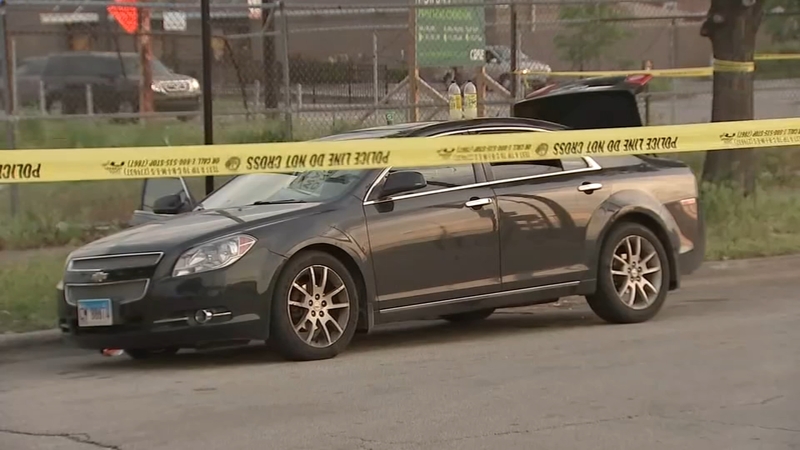 CHICAGO (WLS) -- A man was shot and carjacked Monday night, while helping a friend change a tire near Midway Airport, Chicago police said.

The victim was at Advocate Christ Medical Center in Oak Lawn Tuesday morning, fighting for his life.

The 28-year-old man had just finished changing his friend's flat tire at about 6:25 p.m. in the 4700-block of West 64th Street, just blocks from Midway, when police said a man in a ski mask approached him and tried to take the car keys.

The two struggled, and the carjacker pulled out a gun, police said. The victim was able to knock the gun from the carjacker's hand, but the male suspect grabbed it and shot the victim in the head. His friend and her three children watched in horror.

He's now recovering at Advocate Christ Medical Center where his coworkers at Chatham's O'Reilly Auto Parts are trying to process what happened.

"He doesn't do anything to anybody, that's why I don't understand how something like that happened to him," said the victim's supervisor Melissa Taylor.

Somehow the bullet spared her tiny bones and the young girl was able to go home from the hospital two days later.

The suspect took off in the man's dark blue Nissan Altima.

The FBI in Chicago is involved, as well, and officials tweeted out a description of the stolen vehicle, along with the license plate information. Officials said there is a reward if information is provided about the case.

Have you seen this vehicle? Law enforcement is searching for this Nissan (IL CA 91727) involved in a violent carjacking in which 1 person was shot. Your tip could be worth a reward. Call 1-800-CALL-FBI or report anonymously at https://t.co/5KoqNDuLO3. pic.twitter.com/NlmRi8oNjV

An FBI spokeswoman said the agency is part of a carjacking task force for Chicago and its surrounding suburbs. Carjacking is a federal crime, which carries significant penalties, she said.

The suspect was described as an 18- to 25-year-old man, who is approximately 6-foot-1 inches tall, Chicago police said. He was wearing dark clothing and a ski mask.

The victim's father tells Eyewitness news that despite being shot in the head, the bullet did not strike his son's brain and he has stabilized but remains in intensive care.