The ball got stuck between the backboard and the shot clock early in the second half.
WLS 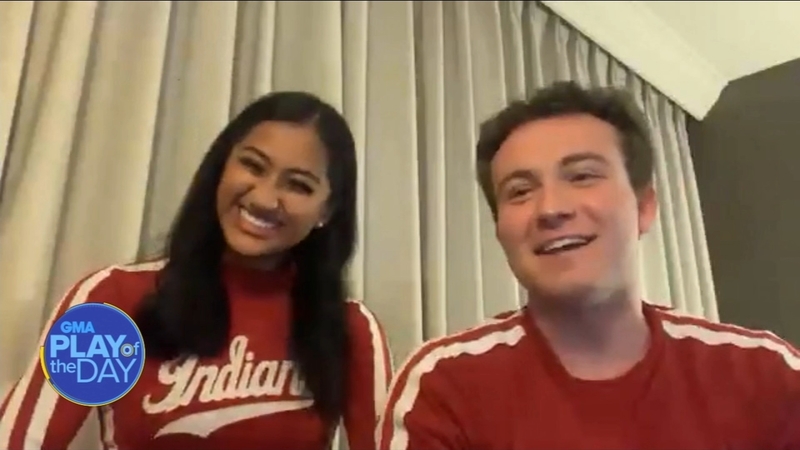 PORTLAND, Oregon -- Logan Johnson scored 20 points and fifth-seeded Saint Mary's took advantage of No. 12 seed Indiana's grueling recent schedule, rolling to an 82-53 victory in the first round of the NCAA Tournament on Thursday.

But there was one play that is getting a lot of attention and it wasn't by Johnson or any other player.

When the ball got stuck between the backboard and the shot clock early in the second half, the players tried with no success to get it free.

At first it appeared, Saint Mary's Matthias Tass would try standing on a folding chair to reach the ball.

But the plan turned into a ref standing on the chair to try and poke it free, to no avail.

A female cheerleader was lofted by a male counterpart.

Sure enough, the dynamic duo of Nathan Paris and Cassidy Cerny got the ball free.

"What a play! The cheerleader saves the day!" the commentator said.

Indiana University Cheerleading cheered on the pair on Instagram.

"Their 'One Shining Moment' tonight doing what they do everyday. Nathan Paris and Cassidy Cerny!!" IU Cheerleading said.

Cerny and Paris were interviewed about their game-saving move as the second-half went on.

"It actually happened. I didn't think it was going to happen," Cerny said.

"They had the chair out there but they couldn't put the player on the chair and I was like, 'Well, we lift (cheerleaders) up all the time so why don't we just try that?'" Paris said.

Cerny said she is very comfortable being propped up on another cheerleader's hands. She said she trusts Paris with her life.

Both cheerleaders shared tweets and Instagram posts of others congratulating them and for stealing the show.

"All in a day's work!" Paris tweeted.

"Don't worry guys, I got it," Cerny's Instagram caption read accompanied by an image of her grabbing the ball. 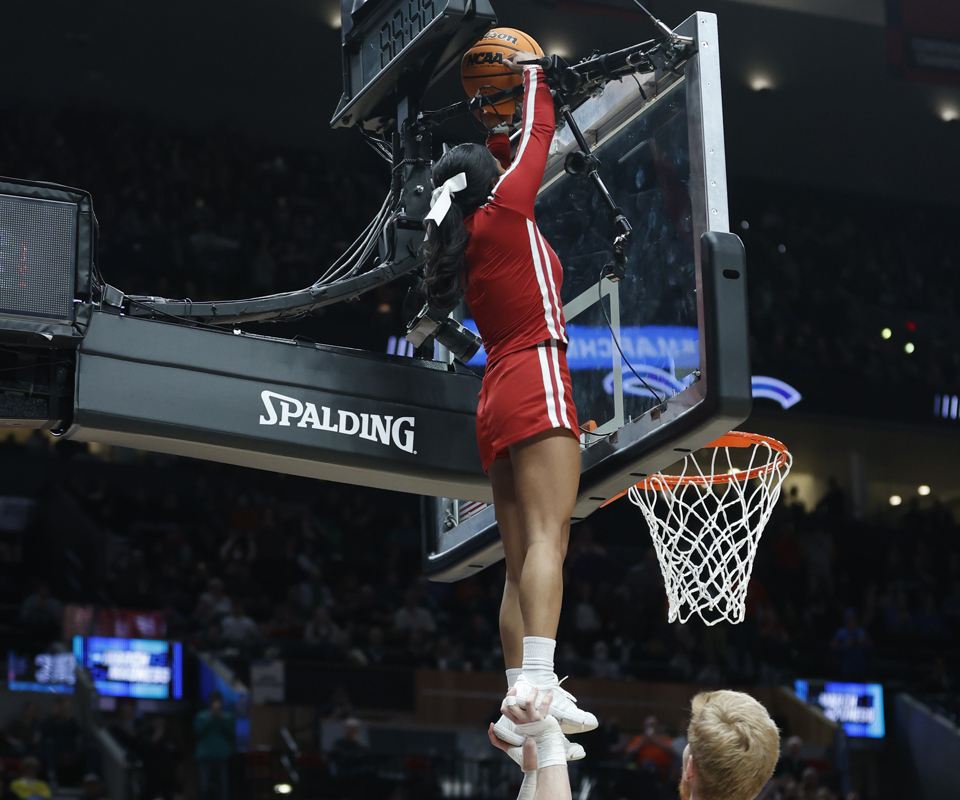 An Indiana cheerleader is lifted up to retrieve a basketball that became lodged on a camera mount at the top of the backboard, Thursday, March 17, 2022, in Portland, Ore.

Thanks to the two cheerleaders, the first-round game was able to continue.

Tommy Kuhse added 19 points and six assists for the Gaels (26-7), the only team to beat top overall seed Gonzaga in the West Coast Conference this season. Saint Mary's will face No. 4 seed UCLA, which rallied to beat Akron 57-53, in a second-round game Saturday.

"We're a gritty, not pretty team," Johnson said. "We all find ways to get it done. And we know once we get going defensively, and especially offensively, that's when teams are in trouble and they really find out what they're stepping into."

Trayce Jackson-Davis had 12 points for Indiana (21-14), which lost by its largest margin in the tournament. The Hoosiers arrived in Portland early Wednesday morning after an all-nighter because of flight delays from Dayton following the First Four. Indiana won its first tournament game since 2016 by beating Wyoming 66-58 on Tuesday night.

Thursday's game was Indiana's fifth in seven days. Saint Mary's came in fresh from a 10-day layoff after falling to the Bulldogs in the WCC Tournament title game.

"I've never been a coach that makes excuses," Indiana's Mike Woodson said. "I had to do better to get these guys ready. And I give Saint Mary's all the credit, but I thought tonight we just didn't have it and I know we have a much better team than we showed tonight. That's on me."

Saint Mary's pulled away late in the first half and led by as many as 34 points - and the overtaxed Hoosiers couldn't catch up.

"I think we wore them down," Gaels coach Randy Bennett said. "All the factors that came into play with them playing Tuesday and having to travel. But I don't want to negate the fact that our guys played well when they needed to play well."

The Gaels, ranked No. 19 in the AP Top 25, earned their highest seed in 11 NCAA Tournament appearances. Their best finish in the tournament came in 2010, when they went to the Sweet 16.

Saint Mary's stature in the tournament was no doubt boosted by its 67-57 win at home over No. 1 Gonzaga on Feb. 26.

Indiana, which has won five NCAA championships, was making its 40th tournament appearance.

At least at the start, Indiana wasn't showing any fatigue. The Hoosiers had a narrow lead for much of the half until Alex Ducas' 3-pointer that put Saint Mary's in front 25-21. The Gaels extended the lead to 33-26 on another Ducas 3.

Saint Mary's ground Indiana down and led 40-28 at the half. Ducas, a junior from Australia, finished with 13 points.

The Gaels stretched the lead to 55-31 in the second half on Kuhse's 3-pointer.

"I think overall they were a sharper team than us," Jackson-Davis said. "They hit their shots, they ran their offense and they were overall the better team."

Indiana: The only previous meeting against Saint Mary's was way back in 1957. The Hoosiers won, 79-66 in Bloomington. ... Jackson-Davis averaged 18.4 points and 8.2 rebounds.

Saint Mary's: Bennett, in his 21st season with the Gaels, was named the WCC Coach of the Year. He's won the honor four times. But the latest comes after turning around a team that struggled last season to finish 14-10. ... Saint Mary's wore warmup jerseys that read "No Quit."

Saint Mary's will play UCLA in the second round Saturday.