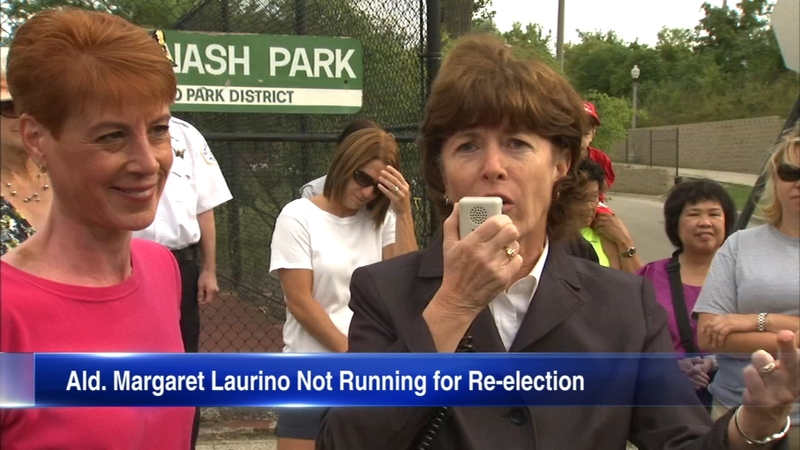 CHICAGO (WLS) -- Alderman Margaret Laurino of the 39th Ward had announced Friday that she will not be seeking re-election.

Laurino has served the 39th Ward for more than two decades.

"It has been decades since I was a young girl at St. Edwards, but my love for the 39th Ward has only intensified," Laurino said in a statement. "Improvements have been significant under my leadership during the past 24 years. It is one of the safest in the city with a flourishing quality of life.

In a statement, Mayor Rahm Emanuel said, "For over two decades, Alderman Laurino has been advocating, fighting for and serving the residents of the 39th Ward. I've been proud to partner with her when I was a member of Congress and as Mayor, and I'm even more proud to call Marge a dear friend. She's never been shy in making it clear that her community is her priority, and that passion for public service can be seen in the Albany Park Stormwater Tunnel, in the new annexes at Sauganash and Palmer elementary schools, in the new science labs at Von Steuben high school, in the new Albany Park and Independence libraries, on the roads, in community parks, at neighborhood businesses and so much more. Marge works her fingers to the bone, stands up for what she believes in and calls it like she sees it. In my eyes, there's no higher praise."
Report a correction or typo
Related topics:
politicschicagomayfairforest glensauganashalbany parkirving parkchicago city council
Copyright © 2022 WLS-TV. All Rights Reserved.
TOP STORIES
Teen killed in Noble Square shooting: CPD
Man wounded in shootout with University of Chicago police: CFD
Teens allowed to drive big rigs in new federal program
Chicago children's TV host Bill Jackson dies at 86
White House to make 400M N95 masks available for free
AllState buys Loop building
At-home COVID-19 test request website goes live 1 day early
Show More
Chicago Weather: Windy, crashing temperatures Wednesday
Pressure growing for safe places to inject drugs in Chicago
Lightfoot returns to public events 1 week after getting COVID
Girl, 11, and teenage boy, 16 wounded in shooting in West Pullman: CPD
Texas synagogue survivors trained by Chicago-based security nonprofit
More TOP STORIES News