March on Washington 2020: After COVID-19 cancels trip, Chicagoans work for change at home

Nearly 6 decades ago Martin Luther King Jr. gave his famous "I Have a Dream" speech in Washington D.C.
WLS
By Mark Rivera 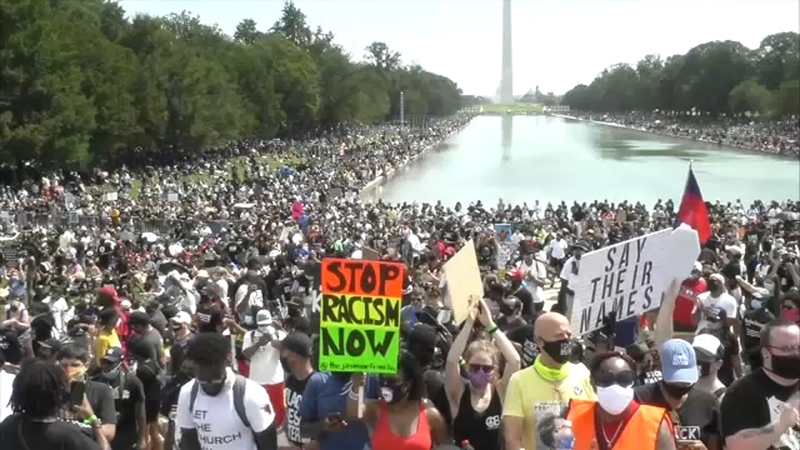 Hundreds in Chicago cancel trip to Washington March, work towards change at home

CHICAGO (WLS) -- There are hundreds of Chicagoans who wanted to go to the 57th anniversary of MLK's historic march on Washington but were unable to because of Washington D.C.'s self-quarantine rules.

However, while they couldn't join the movement in the nation's Capitol, the group is still working to honor the march through their actions at home.

Tonya Hooks was only a child when Martin Luther King Jr. led the first march on Washington nearly six decades ago.

"We wanted them to see what our ancestors went through so that we could be free," Hooks said.

She says she should have been following in those footsteps, bringing young people along from the South Side in hopes of change.

"We were taking them to maybe give them some hope on moving forward and out of this," she said.

Hooks and others from My Block, My Hood, My City were going to the march until self-quarantine rules canceled their plans.

"I think we shouldn't see it as an opportunity to kind of sit back and sit this one out," she said.

"I think we should see it as an opportunity and how we can still engage," added Zindy Marquez.

Marquez said while she isn't able to march in Washington right now, she is working to further Martin Luther King Jr.'s Dream here in Chicago.

"I think it's so important to honor and celebrate the work of the leaders and the activists that came before us, but then to also take that responsibility of continuing to push this work forward because we have so much more work left to do," she said.

That work is living on in the steps of 21-year-old activist Cedric Caschetta from Lowell, Indiana who is currently in Washington D.C. for the march.

He says he is going to come home more activated, with more fervor to stand up for what's right.