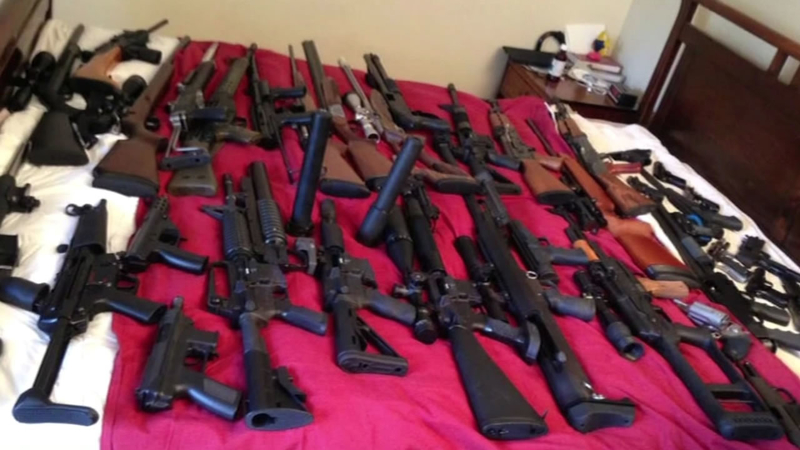 CONCORD, Calif. -- A Martinez man is in jail after agents of the California Department of Alcoholic Beverage Control seized more than 40 illegal and unregistered firearms at his home.

ABC also seized two illegal stills from a Concord business where the man is accused of making rum and whiskey.

This was an investigation several months in the making.

The first tip they received was for the storefront. Inside they discovered the illegal alcohol. They then served a warrant at the suspect's home where they say they found assault rifles, grenade launchers and gun silencers.

Another pic of more weapons seized from Martinez home pic.twitter.com/DbzeSLsKJ4

"This is out of the norm," ABC Public Information Officer John Carr said.

ABC agents conducted an undercover investigation beginning in Concord after receiving a complaint that 53-year-old Sterling Hartwell Albert was making and selling rum and whiskey illegally.

Neighbors of the Concord business say they saw agents move in. "A lot of commotion," neighbor Paul Piscoran said.

They seized two illegal stills along with more than 200 gallons of illegal distilled spirit and more than 500 cases of illegally produced wine.

"They seemed to be very affable neighbors," Piscoran said.

At his home, they seized more than 40 illegal and unregistered firearms, including assault rifles, grenade launchers and gun silencers.

The California Department of Justice Bureau of Firearms Task Force now has the weapons.

"Our agents, at this time, are just trying to answer the question of why were all these weapons there," Carr said.

"I'm just very surprised because he's been a good neighbor. There are young people that live there," neighbor Carol Madsen said.

Albert is facing felony charges for possessing a still along with the illegal unregistered firearms. He's also facing misdemeanor charges for selling alcohol without a license.