Chicago firefighter killed in line of duty remembered at visitation: 'Everybody loved him' 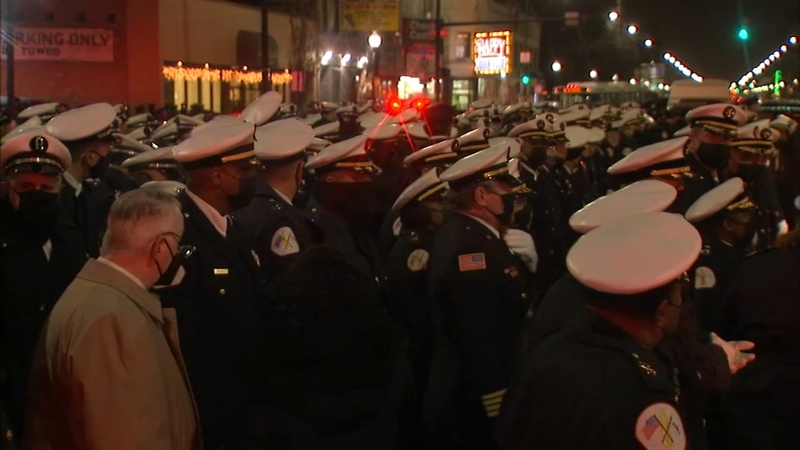 Visitation held for fallen Chicago firefighter: 'Everybody loved him'

MaShawn Plummer died last month after fighting a fire on the city's Northwest Side that also killed a civilian.

He lost his life in an effort to save others. The 30-year-old Chicago rookie firefighter was honored at a South Side funeral home by his brothers and sisters in uniform for his ultimate sacrifice.

Cottage Grove Avenue was shut down for a city block and traffic was rerouted as hundreds of firefighters in full uniform paid respects to one of their own.

A Chicagoan who grew up in Englewood, Plummer was also a college graduate who had studied pre-law but ultimately decided to join the fire department.

"Instead of being a lawyer he decided, because he has a beautiful heart, to save people," neighbor Dolores Johnson said. "That's why he went to be a fireman."

Johnson said she watched Plummer grow up right across the street.

"Everybody was crazy about him," she said. "Everybody loved him. We loved him to death. Like I said....respectful, just a sweet young man."

RELATED | Prayer vigil held in Portage Park after Chicago firefighter death
Plummer collapsed while battling a fire in the Belmont-Central neighborhood back on December 16. He was in the basement of a building on North Mamora and was pulled out and rushed to the hospital, where he later died from his injuries just over two weeks ago.

"It's sad. He was a good guy," neighbor Arnetta Carr said. "His family brought him up real good. I give them a pat on their back, he was a good boy."

Another man who lived in the building, 37-year-old Eladio Gomez, also died in the fire. But neighbors say Plummer's efforts were to save more lives. The man who could have pursued a career as a lawyer chose to protect his city.

"He was a beautiful young man! With a good heart and well educated," Johnson said.

"He had a heart for everybody," Carr added.

Plummer was a member of the Engine 94 firehouse in the Portage Park neighborhood. He had just celebrated his first anniversary as a firefighter/EMT in December.