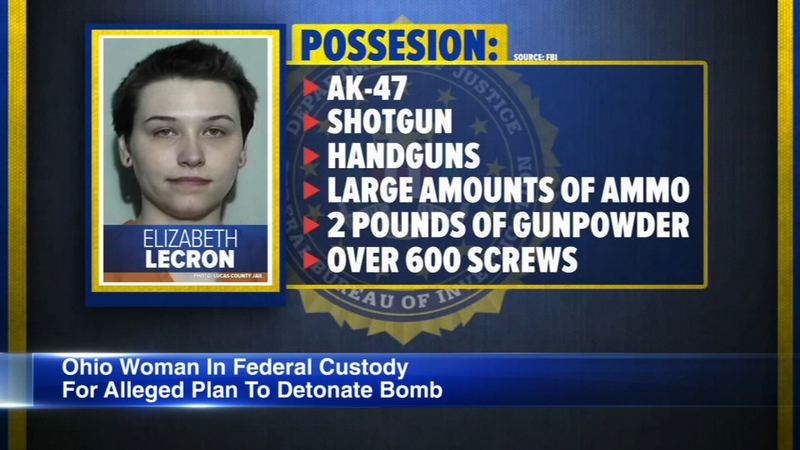 TOLEDO, Ohio -- On Monday, federal authorities announced the arrests of a man and a woman in connection to plotting two separate attacks in Ohio in concert with undercover agents.

In a press conference, federal authorities said a man from Holland, Ohio was arrested after planning an attack on a Toledo-area synagogue. In a separate case, agents also arrested a Toledo woman after she purchased black powder and screws that authorities believe were going to be used to make a bomb as part of a terrorist attack, WXYZ reports.

Joseph Damon, 21, was arrested Friday and charged with one count of attempting to provide support for ISIS, according to the Department of Justice.

Earlier this year, Damon was in communication with undercover agents after he received attention from federal agents for posting photographs of knives and firearms on his social media accounts, as well as a photograph distributed by the media wing of ISIS.

In conversations with undercover agents, Damon said he would be willing to participate in violent attacks, say federal officials.

On Oct. 30., following the mass shooting at the Tree of Life synagogue in Pittsburgh, Damon allegedly told an agent, "I admire what the guy did with the shooting actually. I can see myself carrying out this type of operation inshallah. They wouldn't even expect (an attack) in my area."

In December, Damon continued to talk with authorities about carrying out attacks on synagogues.

Damon met with an undercover agent on Dec. 6, writing down the name and address of the synagogue where the attack was to occur. Later that day, the agent told Damon he purchased rifles for the attack.

The two met on Dec. 7 at a location where Damon took a black duffel bag carrying two rifles. He was then arrested, according to federal authorities.

Elizabeth Lecron, 23, was charged with one count of transportation of explosive material for the purpose of harming others and property.

Lecron received the attention of federal agents earlier this year after she frequently posted photographs and comments on social media glorifying mass murderers, including the Columbine shooters and convicted church killer Dylann Roof.

After her social media account was deleted, Lecron created a new one under the profile "CharlestonChurchMiracle," where she would post photos and comments about mass casualty attacks.

In August, undercover FBI agents talked with Lecron, who told them she and an associate created a plan to commit an "upscale mass murder" at a Toledo bar.

In September, Lecron discussed with undercover agents a pipeline bombing and mentioned a good place to carry out an attack was where she worked because she believed they were polluting the river behind the plant.

By December, she talked with an agent and agreed to buy black powder needed to make a bomb, according to information published by feds in a news release.

Federal authorities said Lecron met with a source at a retail sporting good stores on Dec. 8, where she entered the store by herself and bought two pounds of Hodgson Triple Seven Muzzleloading Propellant. She went to a larger retailer in the Toledo area where she purchased 655 screws of various sizes, some as large as 3 inches, according to federal authorities.