May Day in Chicago: Thousands march for immigrant rights

Thousands of people marched through Chicago Wednesday in support of labor, immigrant and teachers' rights.

CHICAGO (WLS) -- Thousands of people across the country hit the street Monday to fight for fair work accommodations and stand up for immigrant families this May Day.

The Rally for Immigration Justice was held around 1 p.m. at Union Park in Chicago. The group started marching around 2 p.m. to Daley Plaza. Hundreds of people marched in the rain, waving flags and carrying signs. Organizers told the Associated Press than an estimated 20,000 people marched through downtown. 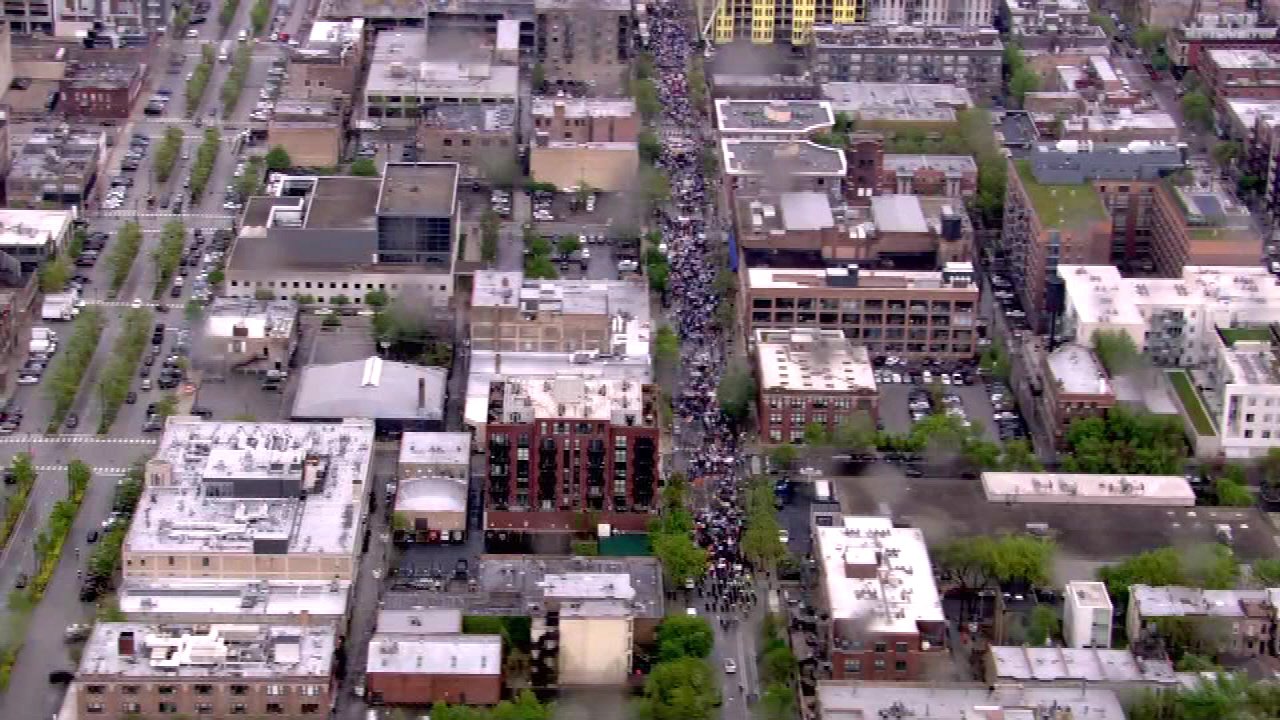 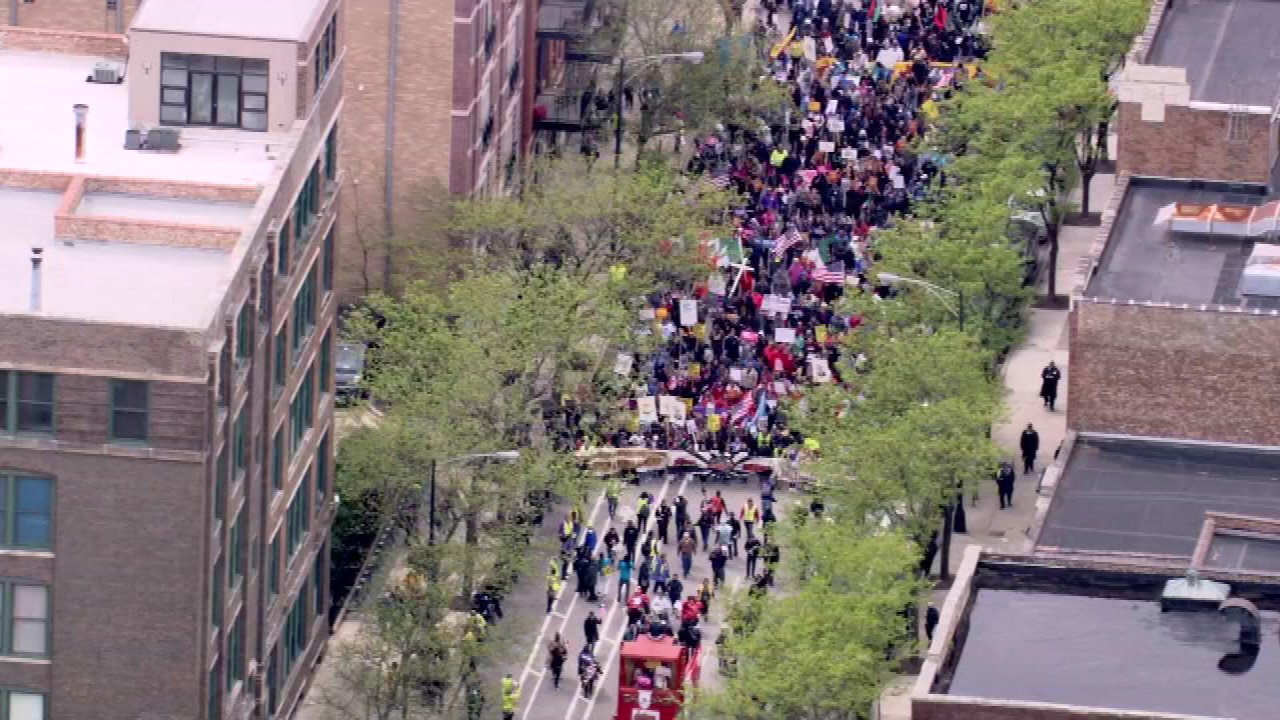 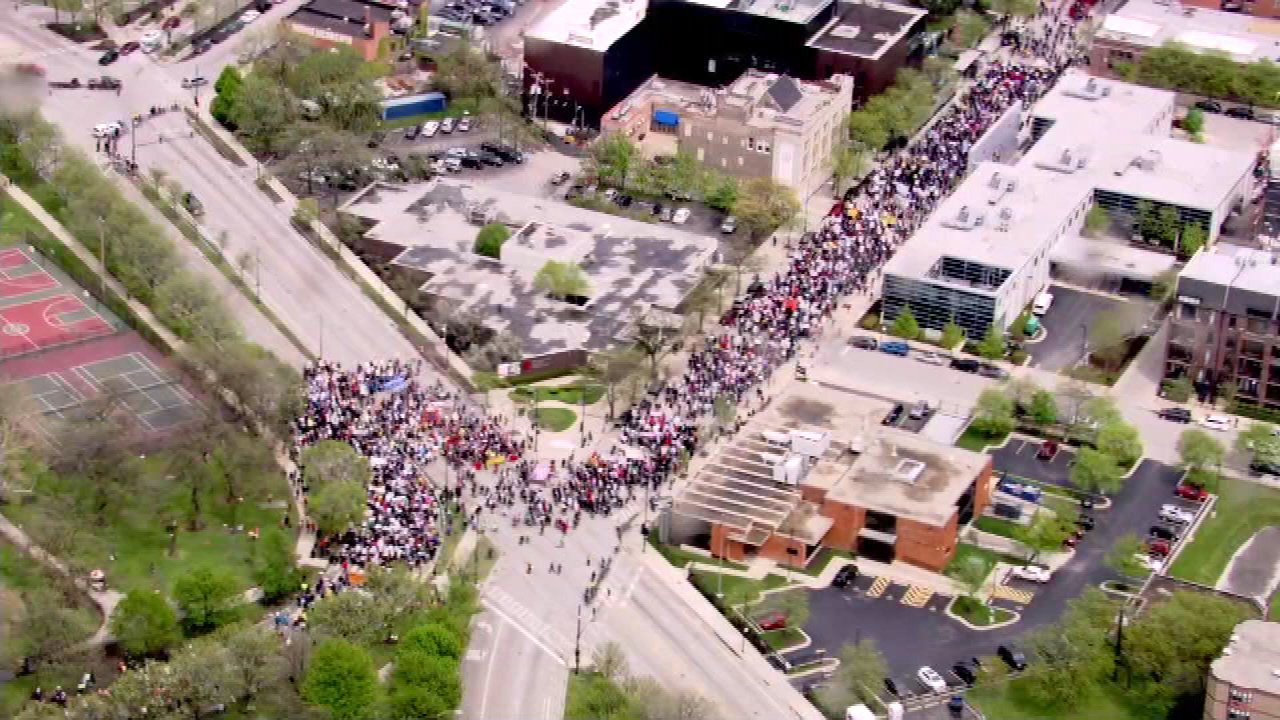 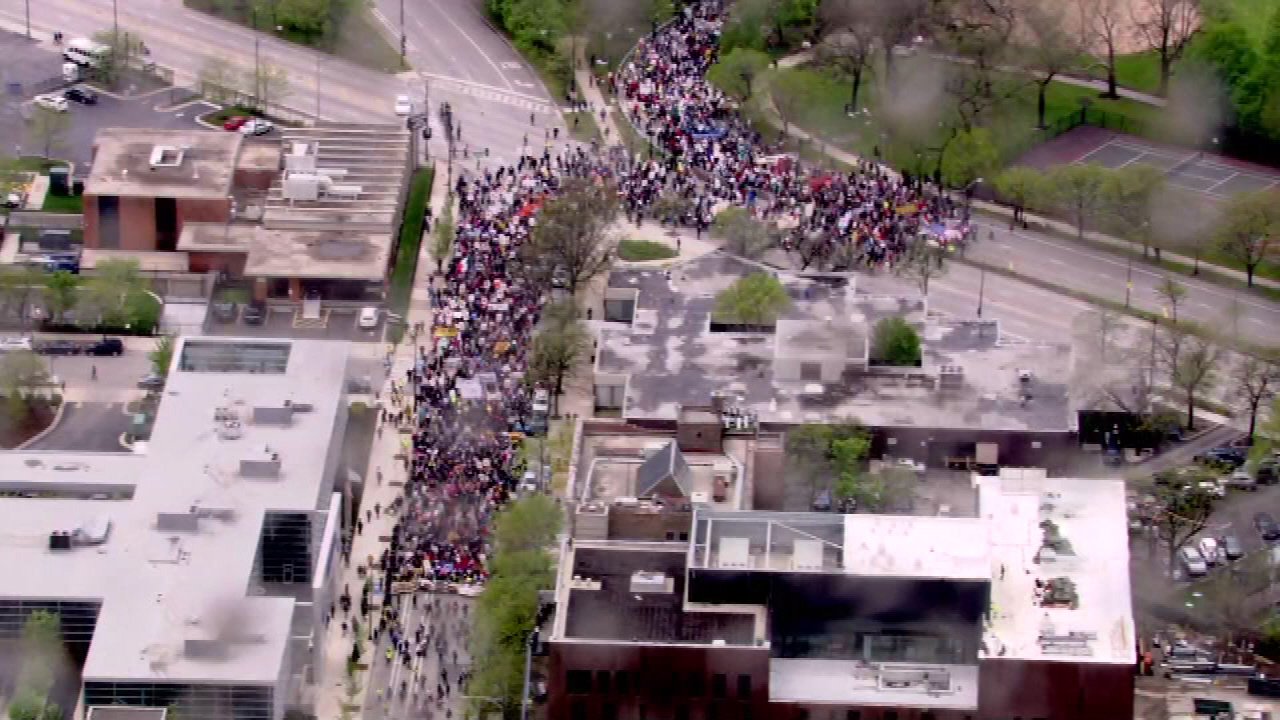 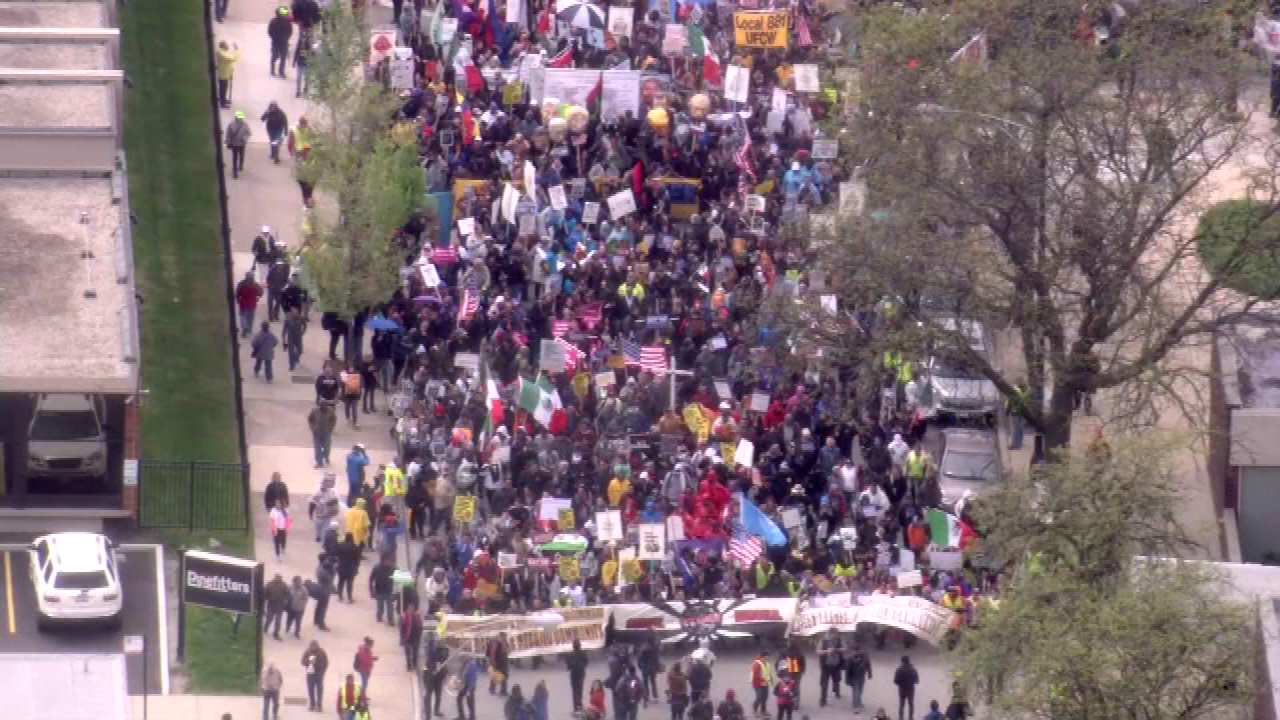 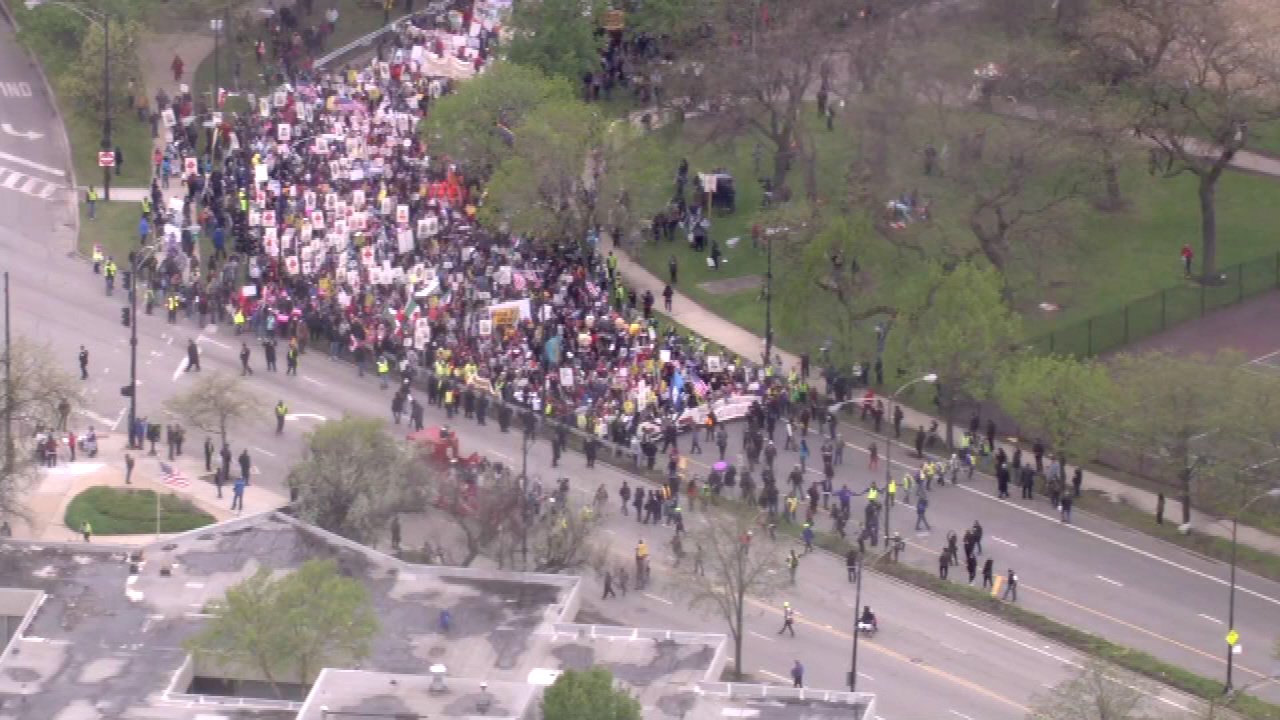 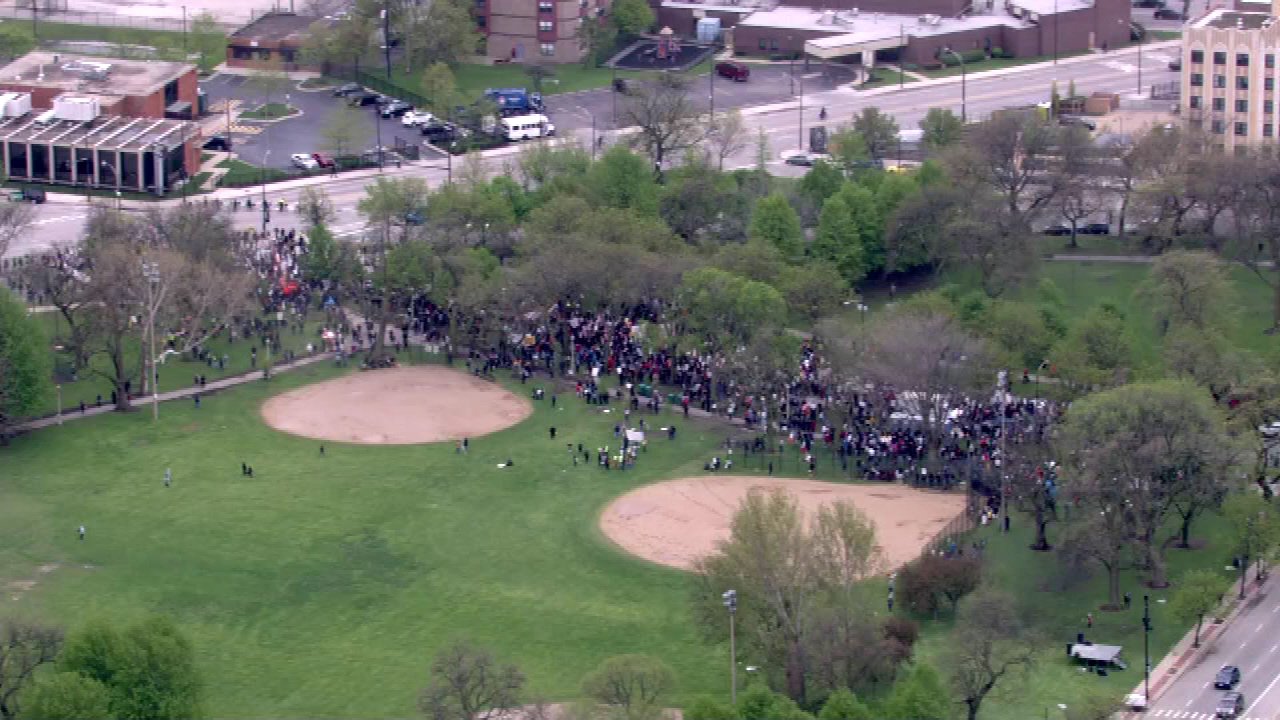 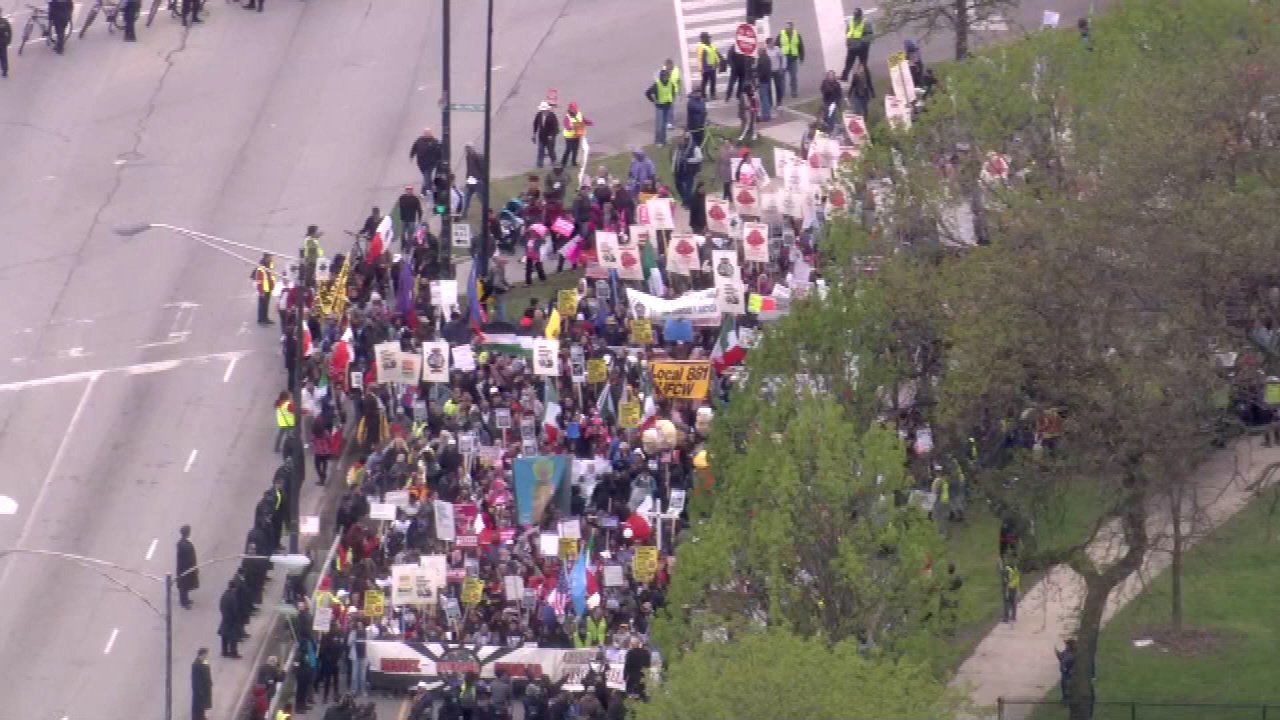 The 2017 May Day march drew an even bigger crowd than in recent years, especially in support of immigrant rights. Karen Vega, who marched Monday, was brought into the U.S. illegally by her parents when she was just nine months old.

"I'm a DREAMer myself. And I am going to college, today, May 1st, is college decision day, and it's just fighting to keep the programs like DACA alive," she said.

Motivated and emboldened by the Trump administration's attempts to curb immigration while also cracking down on those already in the U.S. without illegally, has many of Chicago's immigrant families speaking out.

"I worry for myself and for my kids. The future of my kids, too. Because they need parents to grow up," said Fabiola Morales, undocumented immigrant.

Over the years, Immigration has become the dominant issue in Chicago's May Day marches. This year, however, many more families are voicing their fears and some are making plans in case their relatives are deported.

"He already has it all planned out. He's going to move his earnings under my name and we'll basically have to move with my family members to another part of the country," said Carlos Morales, son of an undocumented immigrant.

Among those joining the crowds were some of the state's public officials. Gubernatorial candidate Chris Kennedy was there, as was U.S. Senator for Illinois Dick Durbin, who sought to reassure the city's immigrant community.

"We are passing a budget bill which says there will be no wall, and expressly says not one penny for a wall, no expansion of the enforcement force for ICE and others, and no penalty for sanctuary cities like Chicago and sanctuary counties like Cook County," Durbin said.

A small group of Trump supporters also attended the rally to voice support for the president's policies.

"Bringing them here and then saying well, sorry, that's all we can do for you, that doesn't really help anyone. So I think taking a break from that, allowing people to assimilate and vetting the people that do come in is reasonable," said Adam Richard, Trump supporter.

"Today is a day for unified resistance. Across the country, people have taken this day to march, organize, and display their opposition to the divisive and immoral agenda of the Trump Administration... I will continue to echo their demand for action in the halls of Congress and will join my Democratic colleagues from the House and Senate tonight at an event to demonstrate our commitment to the resistance movement and their values," said U.S. Rep (IL-9) Jan Schakowsky.

Demonstrators were invited to conclude their day with a celebration at Alhambra Palace, located at 1241 W. Randolph, featuring a performance by Cuban group Septeto Nacional. Doors were scheduled to open at 6 p.m.

TEACHERS BRING EDUCATION ISSUES TO FORE OF MAY DAY MARCH

On this May Day, also known as International Workers Day, the CTU encouraged member to attend or support a rally instead of holding a one-day strike.

"It's a day, historically, that the working class in the U.S., which is an immigrant working class, has fought for the eight-hour day, originally, but now for service that will support the future in the neighborhoods, in the schools. We've seen our schools under a real threat and attack, and we hope that people come out and show solidarity and fight for a future we can believe in," CTU Vice President Jesse Sharkey said.

CTU had originally considered a one-day strike on May Day as a response to the ongoing budget problems facing the state's largest school district, but decided against it. However, some teachers took personal days to participate in events today like the rally at Union Park.

"It's pretty empowering. I think that knowing that we are coming together for one common voice is helpful and I think it helps those who aren't quite sure where to stand, how we can move forward together," said Leonor Whitt, CPS teacher.

"I found myself having to use things like DonorsChoose for basic items that we need in the classroom. Art supplies. There is no funding for the classroom," said Ricardo Gutierrez, CPS teacher.

Teachers and workers at Northeastern Illinois University, who had a furlough day Monday and are operating under little-to-no funding from the state, joined CTU members Monday.

"I, of course, would have preferred to help students graduate - planning their schedules, getting into classes. But if I can't be there, then I'd rather be here, telling these students we are behind them, and these teachers, and hope that they will be with us," said Stacy Alikakos, a student advisor at NEIU.

Supporters said threats to immigrants at the national, state and local level gave this year's May Day even greater significance.

"It's fundamental for the entire school body to stand up and support every single student, regardless of their immigration status, faith or income," said Maleeha Chughti, a former student.

Members of more than 30 grassroots and labor organizations gathered around 11 a.m. outside the Cook County Juvenile Detention Center near South Ogden Avenue and West Roosevelt Road for the March for Youth Justice. Organizers called it a "protest of the criminalization of young people of color."