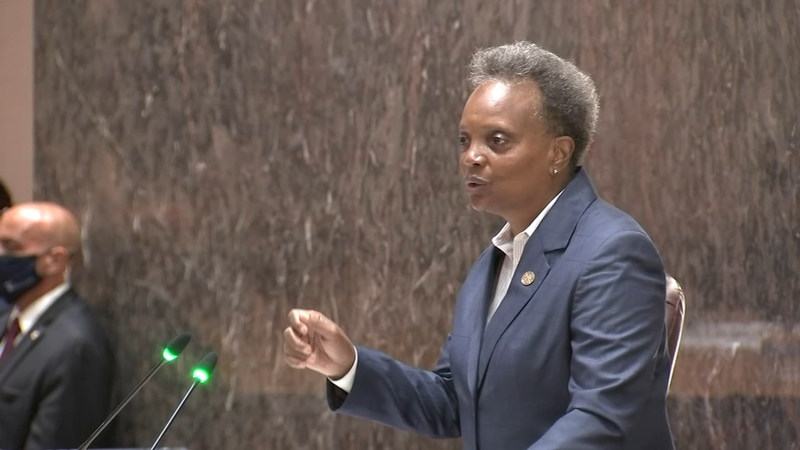 CHICAGO (WLS) -- Mayor Lori Lightfoot presented her proposed 2022 budget to the City Council Monday and it does not include a property tax increase for existing properties.

In August, the mayor projected a budget shortfall of $733 million for the 2022 budget.

The shortfall is down from the $1.2 billion deficit from last year, when revenues were greatly impacted by the COVID-19 pandemic.

The combination of the pandemic and ongoing violence has taken its toll on neighborhoods that have historically been neglected. The mayor said in her address it's time for that to change.

"We must be intentionally on the side of our most vulnerable residents, seniors, the homeless, the addicted, the jobless, as we have enough riches in this city to extend a hand to our brothers and sisters," Lightfoot said.

"There is a brand new program that will provide revenue for the poorest, most affected people like this," said Laurence Msall, president of the Civic Federation. "We want to know is how is it going to be funded after the federal relief money is gone?"

And some of the mayor's critics in the City Council voiced similar concerns.

"That is all federal money being used as sort of a slush fund but at the end of the day, if we are creating all these new programs why are we raising taxes?" said 9th Ward Alderman Anthony Beale.

Mayor Lightfoot said the city is able to close a budget shortfall of $733 million without any significant increases in taxes or fees.

But the property tax levy, which is built in from last year's budget, could impact new properties. If that's the case, the mayor will have an easier time getting the aldermen on board as many of them have been vocal about a property tax hike for residents.

"The rest of it is new property coming off the rolls now, it is a small portion tax hike," said Ald. Pat Dowell, Budget Committee chair.
"We have to see what the investments are. We're talking about revenue. If there's revenue coming to the community in a fair and equitable way, then I think that's something we can take a look at, but if it's the same as it is right now, then there's a hard time supporting that type of budget," said Alderman Gilbert Villegas.

As part of the proposed budget, the deficit is addressed by $56.3 million in new Corporate Fund investments with $298.2 million in savings and efficiencies, and $491.1 million in new or increased revenues.

"Chicago's 2022 'Recovery Budget' will allow us to not only fulfill the obligation we have to our residents, but future generations-and that is to seize this once-in-a-lifetime opportunity to transform our city for the better," said Mayor Lightfoot. "With $1.9 billion in key and enhanced investments, we will develop Chicago into a safer, stronger and more prosperous place in which people can safely raise a family, build a business, and make a better life for themselves. As much as these investments are a commitment to our city's immediate and most urgent needs, they are also bridges to the brighter future that is just over the horizon."

In the meantime, the $16.7 billion budget includes nearly $2 billion in investments planned going to affordable housing, homelessness and climate investments among other areas.