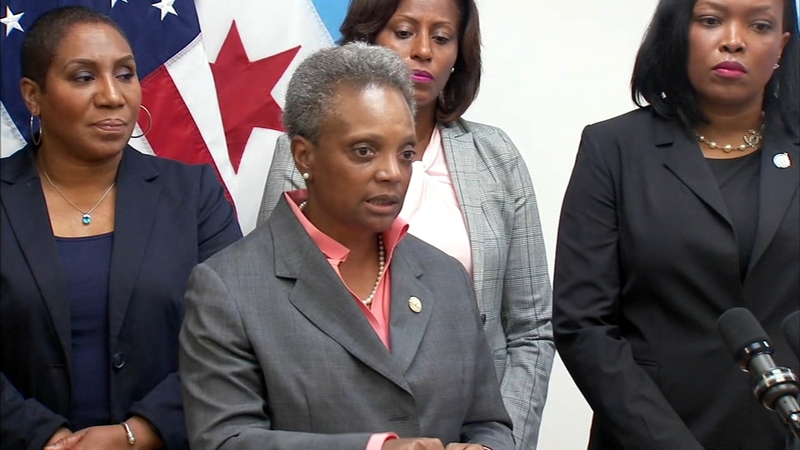 Lightfoot brushes of critics of her first 100 days in office

CHICAGO (WLS) -- Mayor Lori Lightfoot is brushing off critics who say she has not kept many of her campaign promises as she approaches 100 days in office.

With issues like police accountability, an elected school board and helping the homeless on their agenda, numerous community groups came out with their report card on the mayor's first 100 days in office.

"We are holding Mayor Lightfoot to the promises she made as a candidate. We give her a D grade. She hasn't failed yet, but it's a far cry from what the people of Chicago were promised when they voted for her in April," said Emma Tai, executive director of United Working Families.

The mayor was unfazed at an event at a West Side school.

"My job is not to please every single constituency. First of all that's impossible; my job is to make sure that we are true to the values that I ran on, true to the mandate that we were given by the voters," she said.

"She may disappoint some people, but some of those expectations are unreal and some of them are in the process now," said political consultant Don Rose, who has advised Lightfoot since early in her campaign.

Lightfoot promised to reform city government and claimed success by centralizing many of the functions once handled by aldermen and by banning outside work that conflicts with city business.

"I think we've made a significant amount of progress," she said. 'We really laid the foundation for a completely different way of governing in Chicago."

And while gun violence still plagues many neighborhoods, shootings and murders are down year to date from 2018.

"You look at August, we're actually down fairly substantially. Now, I hesitate to say that because I'm superstitious, but also because I don't want to give the impression that we are satisfied, that we are taking a victory lap," she said.