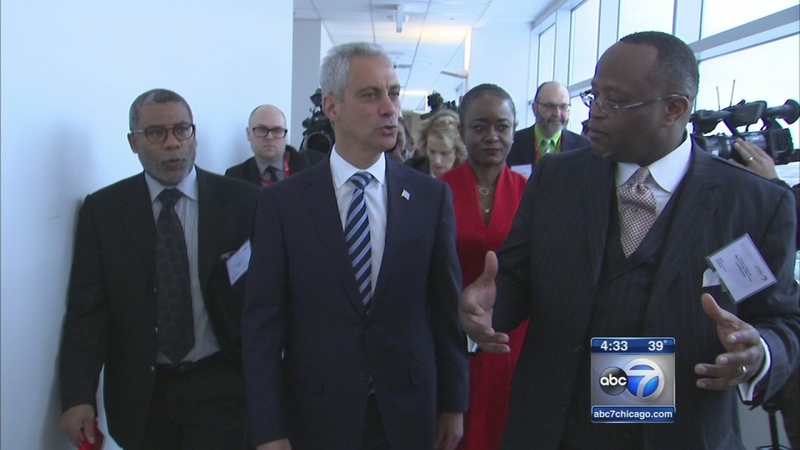 CHICAGO (WLS) -- Chicago Mayor Rahm Emanuel is working overtime to improve his image in the city's African-American community. He's faced intense criticism over his handling of the Laquan McDonald case.

About a dozen demonstrators called for Emanuel to resign Wednesday morning outside Malcolm X College, where the mayor was touring the new health sciences school.

"Everybody else is around the back. We tried to meet the mayor once he came out here, but he's trying to give us the runaround," activist Jared Steverson said.

Relentless demonstrators have been pursuing Emanuel wherever he goes.

"They haven't been at my house in five days. I don't need to entice them to come back," Mayor Emanuel said.

Earlier this week, the mayor joined African-American leaders inside a guarded CTA garage. Today he attended a guest-only ribbon cutting at Malcolm X.

Emanuel, who won nearly 60-percent of Chicago's black vote last May, has seen his approval slip dramatically after the release of video showing a white police officer fatally shooting a black teenager, according to a December survey.

"It's not about me earning points. It's about making sure the kids of Chicago, they're earning a good paying job and good career," Emanuel said when asked about the week's events.

"As you can see, he's going to black colleges. He's going to places where black people and Latino people are because he wants to get us back before election time comes in the next three years," Steverson said.

When asked if that could happen, Steverson said, "not at all."

Steverson said anti-Emanuel demonstrators have eyes on City Hall's fifth floor who let them know when and where Emanuel will be. He also said protesters will not give up, but their numbers have dwindled significantly since Mid-December.