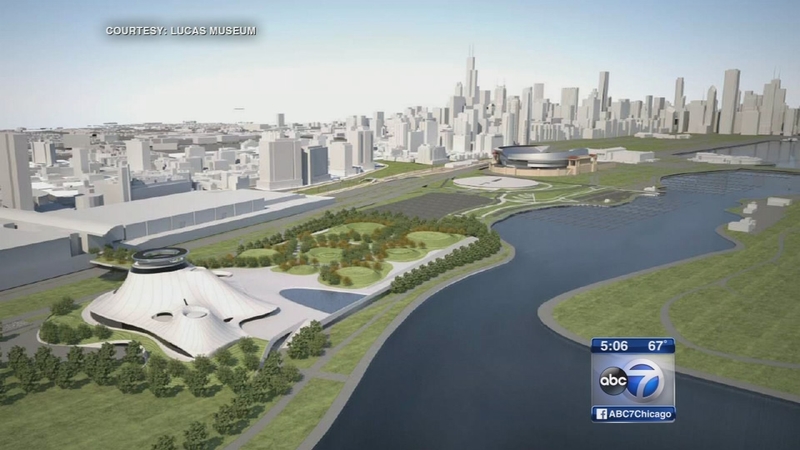 The proposal, which was made public on Friday, is viewed as a compromise after the museum was first proposed for a site that is currently a Soldier Field parking lot. Unhappy with the first plan, the Friends of the Park organization sued, citing laws the prohibit private development on the lakefront.

As part of the new plan, the mayor proposed tearing down the lakeside building in the South Loop, which is also the oldest in the convention center complex, and replace it with the Lucas museum. The key, the city says, is that since the museum is so much smaller than the current building that it would actually create 12 acres of new park land along the lakefront.

Lucas's wife Mellody Hobson, who was in Chicago on Friday to speak at the Chicago Network's "Women in the Forefront" luncheon, said she is doing everything to keep the museum in Chicago.

"Everyone knows where my heart is," Hobson told ABC7 Eyewitness News. "I'm doing everything I possibly can to have this museum in the city that I love. But we also have to deal with reality and time."

"Time is working against us," she added. "A protracted lawsuit is not going to work given that my husband is 73-years-old, and two years of a lawsuit and then years to build it. He wants to see this museum built in his lifetime."

But she is hopeful that the new proposal will pave the way for that.

"This is a win-win on so many levels, and at the end of the day we're left with a world class educational institution that will serve our citizens and citizens around the world for years to come," she said.

McCormick Place officials declined comment. The lakeside center, which includes the Arie Crown Theatre, is one of the least-used buildings in the convention complex. If demolished, a plan to replace it with the Lucas museum could conceivably face another court challenge.

Friends of the Park released a statement responding to the new plan, saying in part: "Friends of the Parks appreciates that the City of Chicago finally reached out to us yesterday with the mayor's new idea for the Lucas Museum. We will discuss and analyze this new information while we review the discovery materials we also just received from the City this week."

Rev. Jesse Jackson appeared to agree with Hobson in a statement he released about the museum on Friday.

"The Lucas Museum of Narrative Art is a once-in-a generation gift to the people of Chicago. The delays and debate about this project must stop immediately. This gift from George Lucas and Mellody Hobson will create thousands of construction jobs, generate tens of millions of dollars in contracts for minority owned businesses and nearly 400 full-time, permanent jobs that will pay strong wages and help buy homes, cars and send children to college," Jackson said in the statement.

"The museum will also offer educational benefits that will fire up the imagination of our city's children who need these opportunities more than ever. I strongly endorse this wonderful project. It's time for the obstruction to end and the construction to begin," his statement concluded.