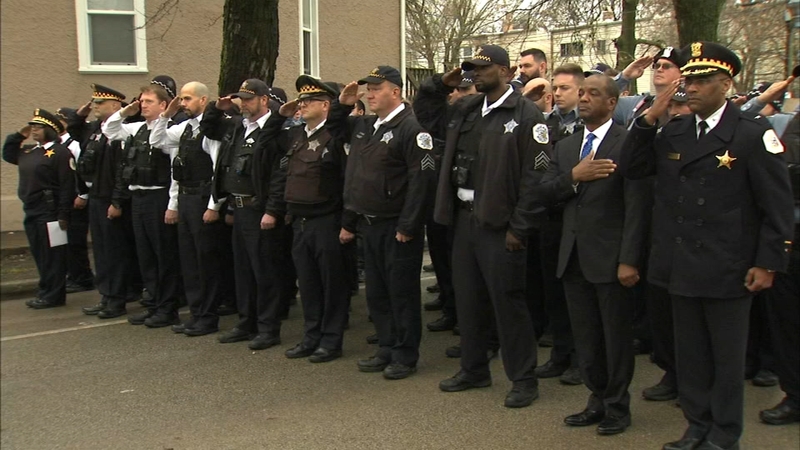 CHICAGO (WLS) -- Family, friends and Chicago police officers came together Sunday to pay tribute to Officer Clifton Lewis, who was fatally shot while trying to stop a robbery.

It's been eight years since Lewis was shot and killed at a West Side convenience store.

Lewis was off-duty at the time, working a second job as security for M&M Foods when two men burst into the store and opened fire.

The men got away with $670 in cash. A getaway driver was parked outside.

"I will continue to patrol the streets of Austin like Cliff did, with honor, integrity and respect," Roman said.

Lewis had been with the Chicago Police Department for eight years, earning over 81 awards for his work.

"To know his friends, to know his coworkers, you knew him because they were a direct reflection of who he was," said Officer Yolanda Talley.

CPD officers held a memorial roll call in Lewis' honor on Sunday. It's a testament to his standing in the community.

The murder had a profound impact on his fellow 15th District officers and on the Austin neighborhood itself.

The block he lived on is now known as The Honorary Clifton P. Lewis Way. His family is still there, including his fiancee and their two children.

"He wanted to be looked at as a person who cared about the community and who would do anything for the community," said Lewis' fiancee, Latrice Tucker.

Edgardo Colon and Alexander Villa have both been convicted in connection with the murder.