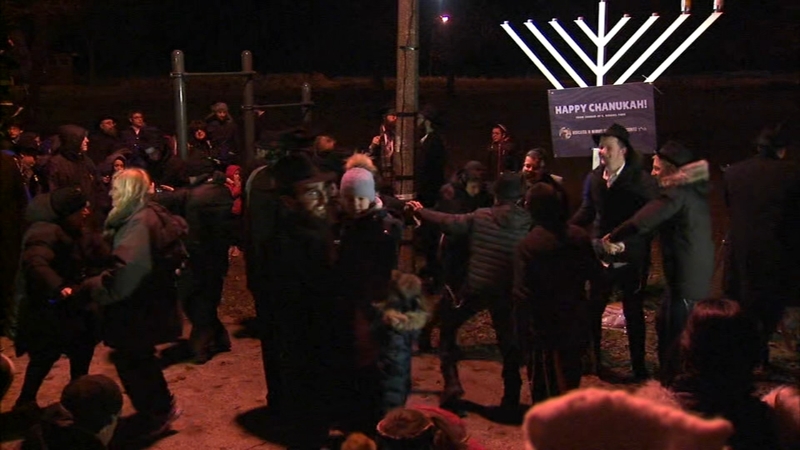 CHICAGO (WLS) -- Eliyahu Moscowitz was killed last month while walking on a path in the Rogers Park neighborhood. His shooter, who police said killed another man 36 hours before Moscowitz's death, is still at large.

To honor the 24-year-old, a menorah was set up on the path in Loyola Park, just feet from where he was killed. It will be lit in his memory and honor for the second night of Hanukkah Monday night.

"What better way to honor his memory than by increasing light at that location where somebody tried to spread darkness and evil. And tonight we're going to do that. We're going to spread a message of light and positivity," said Rabbi Yoel Wolf, Chabad of East Rogers Park.

On the second night of Hanukkah dozens of community members came to dance, sing, celebrate, and remember Moscowitz and the light he brought to their lives.

"I was very close to him," said friend Shaul Wasserman. "He was an amazing person."

Eliyahu Moscowitz was killed last month while walking on a path in the Rogers Park neighborhood.

Police said the same masked gunman shot 73-year-old Douglass Watts at about 10 a.m. on Sunday, Sept. 30, in the 1400-block of West Sherwin Avenue. The next night, at about 10:20 p.m., Moscowitz was shot in the head on the Loyola Park Path near Lunt Avenue, according to police.

The shootings have rattled the Rogers Park neighborhood and led to one of the highest ever rewards offered for any information that leads to an arrest; it now stands at $180,000.

"Even if he's caught, it won't bring our son back, but it will bring us some solace and comfort to know that people are safe," said Rabbi Mendel Moscowitz, victim's father. "The detective has reassured us that there are many, many leads, some legit, some not."

Moscowitz graduated from Skokie's Lubavitch Hebrew Day School in 2008. Tuesday, the school paid tribute to him with a special menorah, itself made out of 1,500 menorahs to be distributed to Jewish families across the area. The school is closely tied to the Moscowitz family; both his parents teach there.