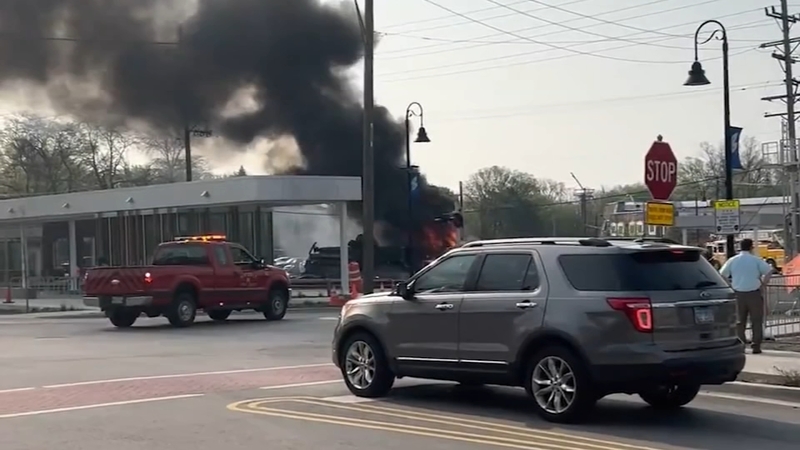 Metra spokesman Michael Gillis said in addition to a passenger who was killed, two other passengers and two BNSF employees were injured in the crash at the Prospect Avenue crossing. All injuries were described as minor.

"All of us on Metra and BNSF Railway are devastated by this death and we will be working hand-in-hand with the NTSB to find out what happened," Gillis said.

Authorities have not released the identity of the woman who was killed, but it appeared she was ejected from the inside of the train as it hit the truck.

The incident made for a chaotic and scary morning for many commuters and people living in the downtown area.

"It was the most horrific thing I've ever seen," commuter Tim French said.

The crash appeared to have happened when a truck got stuck in the tracks as a Metra train approached Clarendon Hills.

Metra officials give an update on a fatal crash involving a BNSF train and a truck in CLarendon Hills Wednesday morning.

Video taken by witnesses on scene shows the initial chaos of that train blasting through a box truck before it burst into flames. Witness Tom Zurgot said he was in a car right behind the truck.

"All of a sudden I just saw the three guys in the truck jump out as fast as they can and then the train just hit it head-on at full speed," Zurgot said. "It was shocking ... you see videos of trains hitting cars all the time, but then you see it live and see a truck lifted in the air and pushed about 100 feet."

The men in that truck evacuated without getting hurt. Metra officials said four others on the train also suffered from minor injuries, including two Metra employees.

The explosion of the accident unfolded just feet away from commuters waiting at the Metra stop.

"There was debris flying everywhere and then we saw the truck just spin around and explode," French said.

Construction has been going on at this stop in Clarendon Hills for about a year now as a new station is built. Commuters think that construction could have stalled the truck on those tracks.

"I think what probably happened, which is what everybody else has been doing, is you get to that lip and you have to go real slow over it," French said, "and that's probably one of the reasons why the truck driver was sitting there."

A Metra spokesperson said this is the second accident to kill a passenger in Metra history. The first fatal accident was in Chicago on Sept. 17, 2005, when two passengers died in a crash on the Rock Island District Line near the 47th Street Bridge.

The National Transportation Safety Board will now handle the investigation into the incident.

"The cab car, which was leading the train, would have a front-facing camera on it and that will be downloaded," said Michael Gillis, Metra spokesperson.

On Thursday, Metra said the BNSF line will run on a Saturday schedule. There will be no express service and trains will not make any stops at the Clarendon Hills station.

Metra also said riders can use the Union Pacific West Line as an alternative and can call the RTA at (312) 836-7000 for travel assistance.