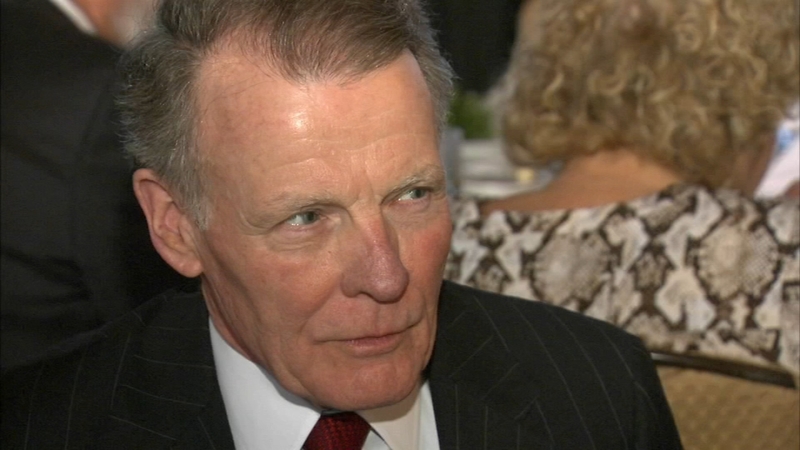 Madigan asking Democratic caucus if he should step down

CHICAGO (WLS) -- ABC7 Eyewitness News has learned Illinois House Speaker Michael Madigan is in the process of asking all members of the Democratic caucus if he should step down.

Some Democrats have called for his resignation after Madigan was implicated in a ComEd bribery scheme.

Several House Democrats confirmed that Madigan called them to gauge whether they support the growing chorus of those calling for him to resign.

The latest to do so is State Rep. Kelly Cassidy (D-Chicago) who said it's not a matter of whether Madigan did something wrong, but the image it presents.

"This is not a question of guilt around," said Cassidy. "This is a question of, what do we want our leadership to look like in our party and in our chamber in at this particular time in our history?"

Criminal charges filed earlier this month by the U.S. Attorney in Chicago said Madigan secretly benefited from bribes the electrical utility admits to paying. Madigan has not been charged in the federal investigation.

ComEd agreed to pay $200 million to conclude the multi-year federal investigation into suspected illegal lobbying, political craft and sweetheart contract deals.
As part of the agreement, ComEd admitted that its efforts to influence and reward "Public Official A," or the Speaker of the Illinois House, "began in or around 2011 and continued through in or around 2019."

Two Houses members have called on Madigan to resign. Tera Costa Howard did so in a letter to the speaker Wednesday, and Stephanie Kifowit did so in a letter Thursday. Madigan was asking members of his Caucus if they supported that call.

Several Democratic senators have also called for Madigan to relinquish the position he has held for decades.

There is concern that if Madigan stays on, it could impact the Fair Tax amendment Democrats are pushing for this November.

"The truth is, he's too busy dealing with these issues to be able to effectively lead us at a time when we've got incredibly important work to do," Cassidy said.

Several Democrats including LaShawn Ford told ABC7 Eyewitness News they urged Madigan not to resign saying it will be too disruptive this close to the Democratic national convention and the election.

Madigan released a statement, "I understand that the last couple of weeks have been difficult for our caucus and party, and I have had many candid conversations with members of the Democratic caucus on this matter. The feedback is positive and demonstrates continued support for me and my leadership roles. I have no plans to resign. I have never made a legislative decision with improper motives and any claim otherwise is unfounded. I will continue to lead the effort to defeat Donald Trump, expand the Illinois congressional delegation and the majorities in the Illinois House and Senate."
Report a correction or typo
Related topics:
politicschicagoloopmike madigangeneral assembly
Copyright © 2022 WLS-TV. All Rights Reserved.
TOP STORIES
Body of missing UIC student ID'd weeks after girlfriend found dead
15 injured, 1 seriously in holiday weekend boat fire: police
Flight cancellations kick off Memorial Day weekend
Texas gunman threatened rapes, shootings on Yubo app, users say
Cause of death for boy found dead in suitcase revealed, police say
Mother accused of killing daughter over 'taking her dad's side': cops
9 shot, 3 fatally, in Memorial Day weekend shooting, police say
Show More
'Stranger Things' installation draws crowd to beach
Wolf pups born at Brookfield Zoo to be cross-fostered in New Mexico
Chicago celebrates Memorial Day weekend
Lincoln Park Zoo lion cub makes debut Memorial Day weekend
Police inaction moves to center of Uvalde shooting probe
More TOP STORIES News