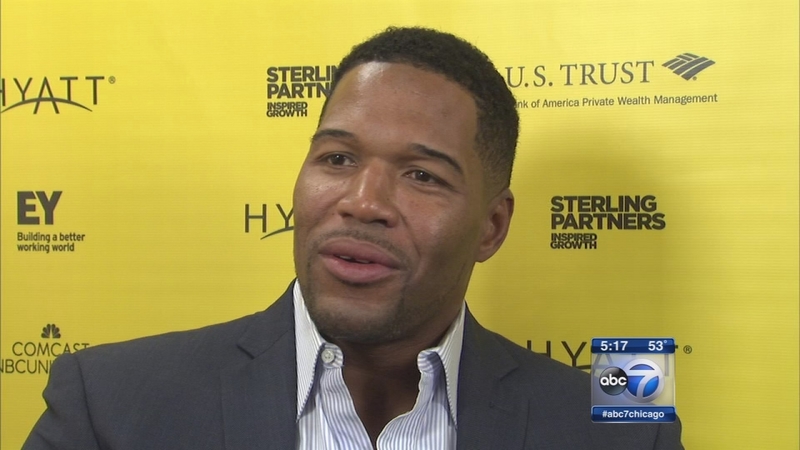 CHICAGO (WLS) -- Chicago Ideas Week, a collaborative week of events designed to share ideas, inspire people and transform our world, presented by a broad spectrum of well-known people, wraps up this weekend.

It's been a gret year for Michael Strahan. The hall of famer turned sports analyst is now a morning talk show host, a job he says he never thought he would get.

"I thought it was something I was able to go on and have some fun, and I had fun, and then I woke up one day and I was offered the job," Strahan says. "So it was kind of, jobs sometimes, or opportunities, come when you least expect them."

In his new book, "Wake Up Happy," that's part-motivational, part-memoir, he talks about overcoming challenges through life lessons.

"If you're afraid, get out of your comfort zone," he says. "Because don't try things because we're afraid, not because we really don't think we can do them."

Strahan, himself a father of four, also talks about lessons his father taught him, like "pause before you quit," which serves as the title for chapter four.

There's also the chapter "B.O.B.: Booty on Back," dedicated to his brothers who teased him about his weight. That challenged led to playing football and working out with fitness guru Jane Fonda.

"I don't know where it came from. I saw these tapes, and they were Jane Fonda tapes, and I got them and it was about, literally, working your butt off," he says.

While Strahan has spent his life overcoming obstacles, Judy Smith has a made a career of fixing them. The crisis manager is the inspiration for the ABC hit TV drama Scandal, which stars Kerry Washington as the Smith-inspired character Olivia Pope.

Smith was the press aide for President George H.W. Bush and is the co-executive producer of Scandal, but she says the storylines don't reflect her experience working in the White House. So what about the real life-political landscape playing out on TV?

"The dynamics of what's going on, that's better television than what is actually on television every single day. There's so many ups and downs in that. So it's very interesting to watch," Smith says.

When asked if she was advising any of the presidential candidates, Smith would only say that she can't comment on that, but she did say you'll have to watch Scandal to see if art imitates life this season.

As for Michael Strahan, he said the possibilities for what's next for him are endless, including another installment of Magic Mike.