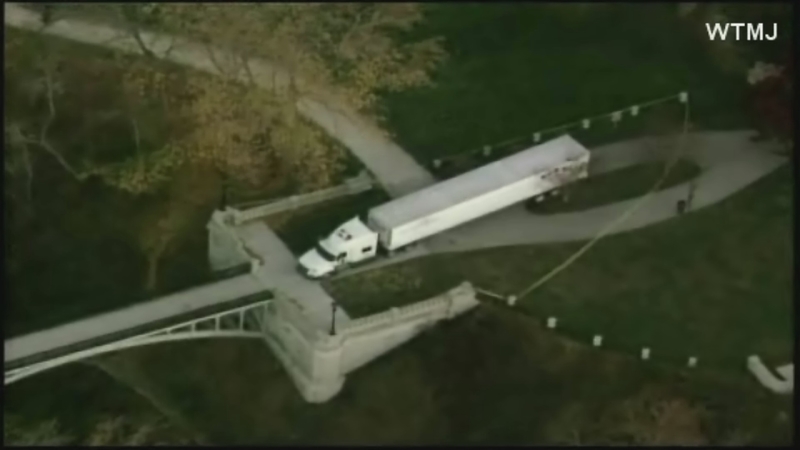 MILWAUKEE -- A man who drove his tractor-trailer onto a walkway at a Milwaukee park, getting it stuck on a foot bridge, says his GPS device is to blame.

The 50-year-old driver has been cited for reckless driving and failing to obey road signs, which carry nearly $580 in fines.

Milwaukee County sheriff's officials say the Indiana man drove the 32,000 lbs. truck onto a walkway Tuesday afternoon at Lake Park. The truck had a 53-foot trailer.

The truck got hung up on a peninsula behind the North Point Lighthouse along Milwaukee's lakeshore. The mishap damaged several trees and concrete railings on two pedestrian bridges.

WTMJ-TV reports that crews were able to remove the truck Wednesday afternoon.
"It's a walking path. Everybody sort of knows that," said neighbor Carol Galletly.

"There should be no way that this bike route was on that GPS like that," onlooker Paul Wasser said. "Incredible when you look at how far he had to have driven over service roads, and gravel roads and a over a really tight bridge before he apparently stopped."

The Lighthouse Museum's curator said it's amazing the truck made it across the first bridge because back in the 60's, they quit allowing car traffic over the bridge because the cast-iron trusses were too frail.

"I don't know how he got across the North Lion bridge without it either collapsing or getting stuck on the bridge," said Mark Kuehn, curator, Lighthouse Museum.

Century-old cement posts and the stability of the bridges prevent crews from just driving the truck out.

"Basically, we've got sort of an A, B and C in place for plans that we'll go with," said Mark Salentine, Ray's Towing. "Plan A, if all goes well, it should look impressive."

First they remove the cab. Then they use a crane to lift up the trailer and maneuver it onto a road near the museum before hauling it all the way out.

"I'm down here checking it out, seeing what they're going to do. Seeing what a heavy rescue is going to look like in person instead of just always watching it on TV myself," Wasser said.