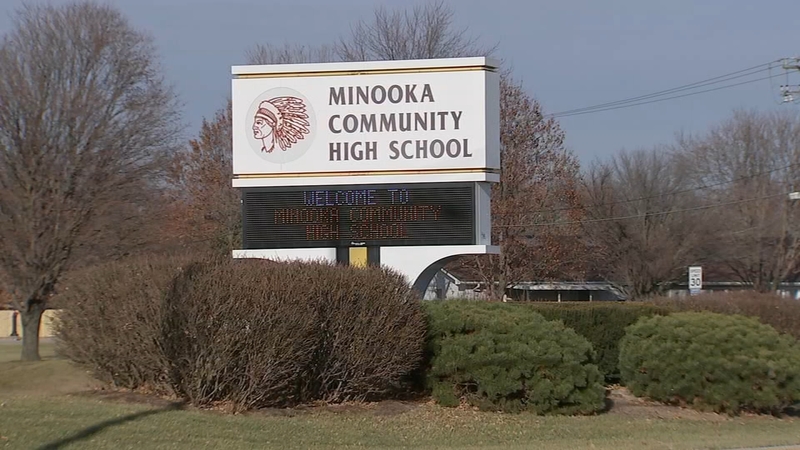 MINOOKA, Ill. (WLS) -- A high school in Minooka is taking action against a student accused of making racially-insensitive statements to a classmate, and even threatening to lynch him.

Last Tuesday as teens prepared for Thanksgiving break, some brought treats for their classmates at Minooka Community High School. But apparently not all classmates were willing to share with everyone.

"He yelled this out in the classroom so that everyone could hear that if my son touched his cookie, he would lynch him," said Tesaxton Washington, whose son is a senior at Minooka Community High School.

Washington's son is multiracial and the student who allegedly made the comment, as well as other racial slurs to her son, is Caucasian, she said. She said that several students reported the incidents to school officials.

The school's Director of Community Relations issued a statement saying, in part: "....administration received an anonymous tip regarding a racially charged statement made by a student. MCHS Administration took immediate action to investigate and promptly administered appropriate discipline to the student involved."

The Minooka Police Department located next to the school became aware of the incident on Thursday, according to the police chief. The family wants the offending student investigated for hate crimes.

"If a student can say, 'I'll lynch you if you touch my cookie,' even though I'm offering to the entire class and I can say that because I'm white, it means they feel emboldened by the atmosphere they are in and that has to change," said Cannon Lambert, an attorney for the high school senior.

"If not handled properly, all it does is give a green light to other kids with the same mindset that they can do this," Washington said. "And all they will get is a slap on the wrist, if that."

In this situation, the Minooka police chief said a criminal investigation would happen only after someone officially files a complaint with the police department. The teen's mom plans to do just that.

As difficult as this situation was, Washington said she was encouraged that other students stepped up to complain about the racially offensive comment. The school has a hotline number and she says some complaints actually happened while the class was in progress.
Report a correction or typo
Related topics:
educationminookahigh schoolracism
Copyright © 2022 WLS-TV. All Rights Reserved.
TOP STORIES
Chicago weather forecast includes snow into Monday | Live radar
Girl, 8, killed by stray bullet ID'd: ME
5 tax changes that can boost your refund this year
Family demands justice after 23-year-old woman found dead after date
COVID mandate draws protestors rallying against proof of vaccination
5 people found dead inside Milwaukee home, police say
$45K raised for Bradley officer recovering from deadly hotel shooting
Show More
$6M worth of cocaine laced with fentanyl seized in Wisconsin
Chicago Weather: AM snow, mostly cloudy Monday
Woman killed in 'targeted ambush' at her birthday party in CA
Police lift SUV to rescue woman, 70, pinned underneath: VIDEO
US draws down Ukraine embassy presence as war fears mount
More TOP STORIES News