Marissa Fuentes is still on oxygen and said it is a long road to recovery, but she's happy to have her family by her side.
WPVI
By Jaclyn Lee 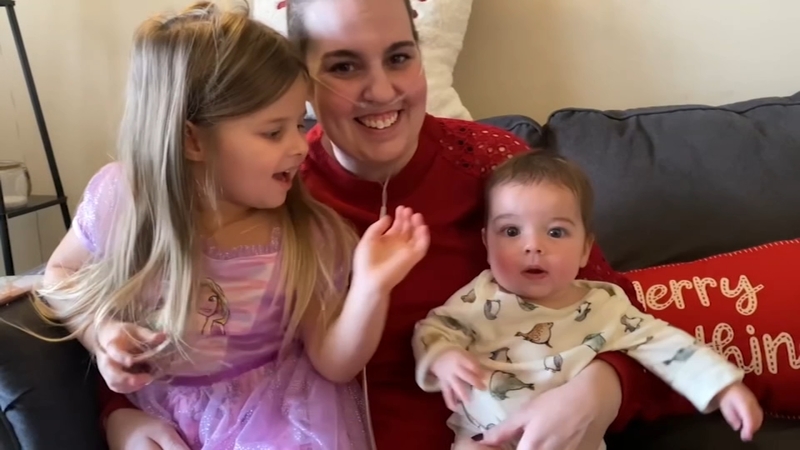 Pa. woman reunited with family after 7.5 months in hospital

WYNNEWOOD, Pennsylvania -- The Fuentes family had been waiting for this day for seven-and-a-half months.

Mother Marissa Fuentes finally got to reunite with her family after a long uphill battle with COVID-19.


She was discharged from a rehabilitation facility on Nov. 24, the day before Thanksgiving. She spent the holiday at home with her family, a feat her doctors described as "a miracle."

"Thanksgiving felt very surreal because I was able to sit at the table with my entire family," Fuentes told "Good Morning America." "I wanted to take every single moment in and I didn't want the day to end because it was so incredible."

In April, Fuentes contracted COVID-19. She had to undergo an emergency C-section for her son, Enzo, who was born at 32 weeks.

Fuentes then contracted severe pneumonia, had lung failure, and was put on a ECMO machine for five-and-a-half months, which essentially acts as a patient's heart and lungs.


So to make it to the moment where she walked out of rehab is nothing short of a miracle.
"I'm not only thankful for my kids and my husband every day, but especially today to be with them," said Fuentes.

Fuentes received care from hospitals around the Pennsylvania area. When she made it to the last step at Bryn Mawr Rehab Hospital, seeing her kids again was her number one priority.

"I told Bryn Mawr Rehab that I was very determined to get home for the holidays, so they made it happen and they pushed me every day so I could get stronger and get home in time for Thanksgiving," said Fuentes.

Meanwhile, Fuentes' husband, Adrian, had to hold down the fort back home while his wife battled for her life.

"It's surreal. For seven months and five days, it was just me and the kids here," said Adrian Fuentes. "And it was such a lonely feeling every single day. It was horrible coming home every day and not having (Marissa) here."

This Thanksgiving is also extra special for the Fuentes family as it's little Enzo's first.

"Living the best life with my kids, being home with them means the world," said Fuentes.

Fuentes is still on oxygen and said it is a long road to recovery, but she's happy to have her family by her side.