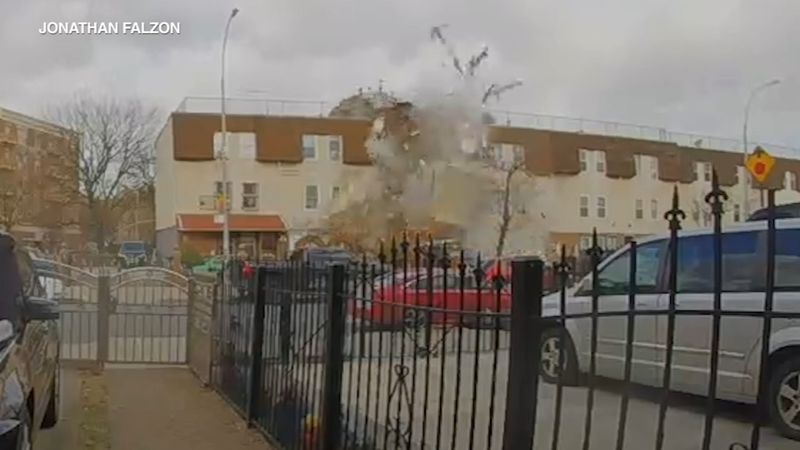 NEW YORK -- An apparent gas explosion at a detached home in New York City's Bronx borough has left one woman dead and several others injured.

Police don't suspect any foul play, and neighbors said they smelled gas before the house exploded.

A neighbor's doorbell camera captured the moment the home exploded.

Now, there is a hole where that house once stood.

Four homes will now have to be demolished as a result of the explosion, New York City Councilman Rafael Salamanca Jr. said.

Derick Waller reports from the scene of the Bronx explosion.

Before it collapsed, a dramatic rescue was captured on police body camera.

Neighbors heard screams, and officers rushed in to save a woman trapped under a couch.

Police release body cam footage of NYPD officers rescuing people from a home after a suspected gas explosion in the Bronx.

"As I stated, when you see the body camera video, you are going to see the quick response of the officers, going into a burning building, next-door from the explosion, not realizing if there would have been an additional explosion. They went inside and carried out a woman who was trapped inside," New York Mayor Eric Adams said.

The police said three women between the ages of 68 and 82 were inside at the time.

Two of them were stabilized, but a 77-year-old woman, Martha Dagbasta, was pronounced dead.

The explosion was reported just before 11 a.m. Tuesday.

ABC New York affiliate WABC spoke to neighbors, who talked about the heroic efforts to try to save lives.

"When I went into the house I couldn't see, but I heard her and she showed me her hand. So I already knew where she was at. So I asked the cops to go help with me, so they could help me get her out," said a man who helped to save a woman.

"The metal melted away. I saw flames in the middle. It was like you lit a match and it went boop," an eyewitness said.

"I just heard an explosion. I checked my window, and I see the third house was just on fire completely," another eyewitness said.

So how did this happen?

It certainly has the hallmarks of a gas explosion but authorities haven't said for sure.