Man, woman in their 70s were outside gardening when home exploded
WLS
By Michelle Gallardo 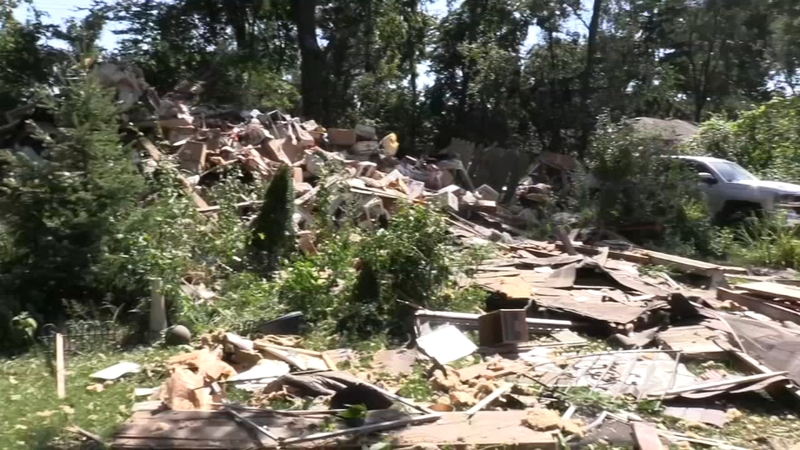 WILL COUNTY, Ill. (WLS) -- One person is in critical condition and two others were hurt after a house exploded in the 2200-block of East Washington Street in unincorporated Will County.

The explosion happened just before 3 p.m., according to the Will County Sheriff's Office.

Neighbors said they heard hissing and then the explosion.

"I turned around, and all of a sudden the house blew up, and the front door came flying at me," one neighbor said. "Like when I was in Vietnam, that's what it sounded, a big explosion. All I saw was a mushroom and stuff flying."

The explosion was so strong it shook the ground over a half-mile away. The house was home to a couple in their 70s, and it was reduced to little more than a pile of debris.

"After the dust cleared, a gentleman that lives across from me and I, we ran across the street and knocked down that fence. They got it gated," a neighbor said. "He knocked the lock off, he went back and saw the gentleman buried up to his chest, and he had a piece of glass sticking out of his head."

The couple's daughter identified them as Yvonne and Randy Hadden. The man and woman were outside gardening when the explosion took place. It is likely what saved them.

More than 50 homes were damaged in an explosion in Marengo.

Neighbors rushed to to their aid in the immediate aftermath, until emergency responders were able to arrive and get them to the hospital.

A neighbor standing across the street was also treated on the scene, authorities said.

Some streets were closed in the area as officials investigated, and some neighbors were told to leave their homes for the night. Arson units and agents from the Bureau of Alcohol, Tobacco, Firearms and Explosives were on the scene, along with Nicor Gas, as they look at all possible scenarios.

It was not immediately clear later Sunday what caused the explosion, and neighbors said they didn't smell any gas.

Ensuring the safety of every family Nicor Gas serves is our highest priority.

We were notified this afternoon of an incident on East Washington Street in Joliet. Our teams are working with local authorities to help determine the nature of the incident. We will continue to evaluate if there are any immediate impacts to our customers and the community, and work to ensure the safety and security of our infrastructure.