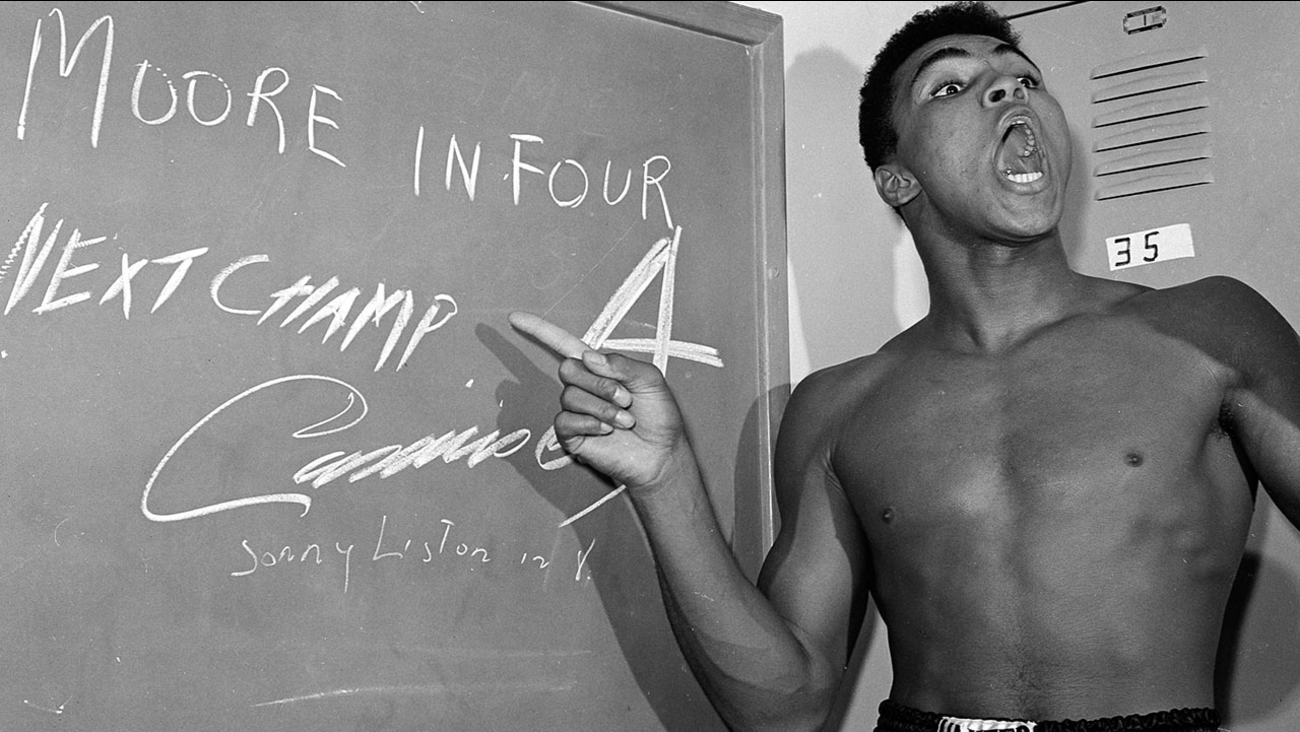 Muhammad Ali points to a sign he wrote on a chalk board in his dressing room before his fight against Archie Moore in Los Angeles on Nov. 15, 1962. (Harold P. Matosian)

President Barack Obama and First Lady Michelle Obama released a lengthy statement on the death of boxing legend Muhammad Ali. Read it in its entirety below.

Muhammad Ali was The Greatest. Period. If you just asked him, he'd tell you. He'd tell you he was the double greatest; that he'd "handcuffed lightning, thrown thunder into jail."

But what made The Champ the greatest - what truly separated him from everyone else - is that everyone else would tell you pretty much the same thing.

In my private study, just off the Oval Office, I keep a pair of his gloves on display, just under that iconic photograph of him - the young champ, just 22 years old, roaring like a lion over a fallen Sonny Liston. I was too young when it was taken to understand who he was - still Cassius Clay, already an Olympic Gold Medal winner, yet to set out on a spiritual journey that would lead him to his Muslim faith, exile him at the peak of his power, and set the stage for his return to greatness with a name as familiar to the downtrodden in the slums of Southeast Asia and the villages of Africa as it was to cheering crowds in Madison Square Garden.

That's the Ali I came to know as I came of age - not just as skilled a poet on the mic as he was a fighter in the ring, but a man who fought for what was right. A man who fought for us. He stood with King and Mandela; stood up when it was hard; spoke out when others wouldn't. His fight outside the ring would cost him his title and his public standing. It would earn him enemies on the left and the right, make him reviled, and nearly send him to jail. But Ali stood his ground. And his victory helped us get used to the America we recognize today.

He wasn't perfect, of course. For all his magic in the ring, he could be careless with his words, and full of contradictions as his faith evolved. But his wonderful, infectious, even innocent spirit ultimately won him more fans than foes - maybe because in him, we hoped to see something of ourselves. Later, as his physical powers ebbed, he became an even more powerful force for peace and reconciliation around the world. We saw a man who said he was so mean he'd make medicine sick reveal a soft spot, visiting children with illness and disability around the world, telling them they, too, could become the greatest. We watched a hero light a torch, and fight his greatest fight of all on the world stage once again; a battle against the disease that ravaged his body, but couldn't take the spark from his eyes.

Muhammad Ali shook up the world. And the world is better for it. We are all better for it. Michelle and I send our deepest condolences to his family, and we pray that the greatest fighter of them all finally rests in peace.