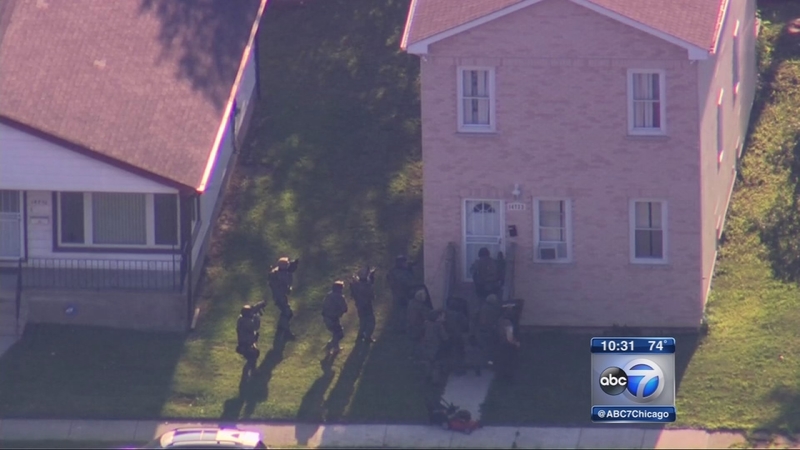 Two offenders have now released four children, but police say they are still holding two children and two adults hostage at a home in Harvey.

Harvey police released the updated numbers after speaking with an 11-year-old boy released from the home. The children - two 1-year-olds, a 2-year-old and an 11-year-old - were brought out to the porch, retrieved by police and taken to a local hospital for observation.

At least one of the offenders has a gun, a spokesperson for the south suburban village said.

The standoff began around 1 p.m., when Harvey police officer Darnell Keel responded to a burglary in progress at a home at 147th and Robey. Keel, an 18-year police veteran, exchanged fire with at least one offender, spokesperson Sean Howard said, and was struck in the arm.

After that shootout, the offenders then barricaded themselves inside the home, where five children and one adult were taken hostage.

Around 2:30 p.m., a second officer was wounded in a shooting with the suspects. He has a graze wound to the arm, Howard said. He was treated at the scene.

Police closed down Sibley Boulevard from Dixie Highway to Wood and removed neighbors from the block.

"They came in, they told me they evacuated the house. That's for our protection, that's what they told us. That's all they told us. Make sure we don't get hit by bullets or nothing," neighbor Meka said.

"It's a very dangerous situation. We obviously evacuated the block to the best of our abilities. We now have 26 responding agencies, and the best law enforcement minds in southern Cook County are here. And they all want one thing- this to be resolved peacefully," spokesman Sean Howard said. "We don't want anyone harmed, even the offenders, if we can. . . We just want this to end peacefully, and get those occupants out of there safely and into the hands of their family."

Officer Keel was taken to Advocate Christ Hospital in Oak Lawn, where friend John Morris said the recently-promoted detective is recovering from a broken arm.

"He's upbeat. He's responsive. He's talking. He's himself. But he's in a lot of pain," John Morris, a friend of Keel's.

Keel was released from the hospital late Tuesday night and is expected to be OK.

Rosa Parks Middle School was also placed on lockdown Tuesday afternoon. Officials said 30 to 40 staff members and teachers were there preparing for the first day of school, but there were no students in the building.