WLS
By John Garcia and Laura Podesta
CHICAGO (WLS) -- Chicago is moving forward with a plan for a new multi-million dollar training facility for the police and fire departments, entering into a letter of intent to purchase 30 acres in the West Garfield Park neighborhood for the facility.

For the first time, both departments will train together in the same building. Firefighters currently train at a facility in the South Loop, which legend says is where the Great Chicago Fire started. However, the facility only trains firefighters even though most emergency situations also involve police.

The estimated $95 million Public Safety Training Academy to be built 4301 West Chicago Avenue is the next step to improve the embattled department. It'll train police and firefighters and comes equipped with active-scenario simulators, dive-training pools and shooting ranges. The facility is expected to include state-of-the-art training both in the classroom and in outdoor areas where they can simulate real life emergency scenarios.

This facility will also offer a fresh start for training a police department that is in need of massive improvement, according to the Department of Justice.

The DOJ found there's systemic racism within CPD, a cover up culture, and pattern and practice of excessive force.
That investigation, was sparked by the shooting death of Chicago teen Laquan McDonald 16 times.

The mayor's office officially revealed plans for the safety training facility Sunday, including how exactly the city plans to pay for the 30 acre lot where it's going to go.

City officials said construction will begin in 2018 and is expected to take 24 to 36 months to complete. The city also said the project will create nearly 100 construction jobs in West Garfield Park.

The new facility comes as the city continues a hiring surge for both departments in an effort to boost public safety. The city has also introduced a new fleet of squad cars, offering more technology for police officers.

Chicago is moving forward with is plan for a Public Safety Training Academy on the West Side. 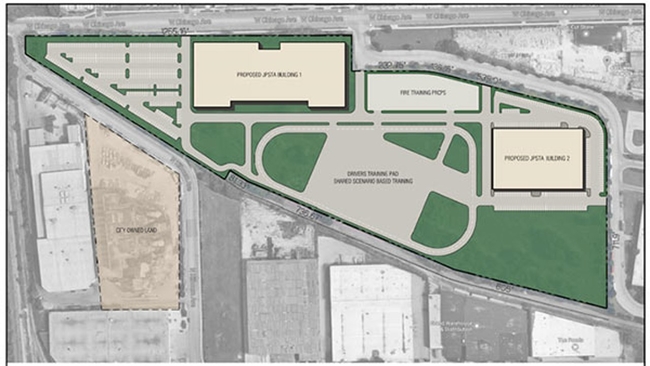