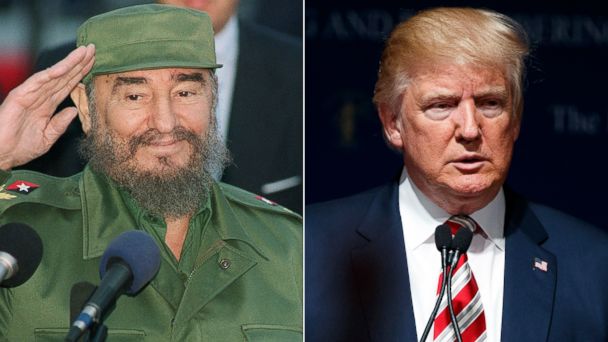 Trump later released an official statement, calling Castro a "brutal dictator," and leaving little doubt as to how he felt about his leadership in Cuba.

"Today, the world marks the passing of a brutal dictator who oppressed his own people for nearly six decades. Fidel Castro's legacy is one of firing squads, theft, unimaginable suffering, poverty and the denial of fundamental human rights," the president-elect's statement started.

He went on to express hope that Castro's death would mark a change in the future direction of the Cuban government.

"While Cuba remains a totalitarian island, it is my hope that today marks a move away from the horrors endured for too long, and toward a future in which the wonderful Cuban people finally live in the freedom they so richly deserve," he said. "Though the tragedies deaths and pain caused by Fidel Castro cannot be erased, our administration will do all it can to ensure the Cuban people can finally begin their journey toward prosperity and liberty."

Cuba will no doubt emerge as one of the first foreign policy tests of Trump's administration. Experts have told ABC News that executive orders carried out by President Obama to normalize relations with the island country could be "easily reversed" if Trump were committed to do so.

At a Miami rally this September, Trump said that he would roll back Obama's executive actions with regards to Cuba unless the Castro regime begins to recognize "religious and political freedom" and free political prisoners.

Sen. Ted Cruz, a staunch conservative whose paternal grandfather, Rafael, immigrated to Cuba as an infant with his parents from the Canary Islands of Spain, reacted early this morning, as did former President Jimmy Carter, who made a concerted effort to normalize relations with Cuba both during and after his term as America's 39th president.

Carter said that he remembered his visits with Castro in Cuba fondly, and extolled the deceased leader's love of his country.

"Rosalynn and I share our sympathies with the Castro family and the Cuban people on the death of Fidel Castro," Carter said in a statement. "We remember fondly our visits with him in Cuba and his love of his country. We wish the Cuban citizens peace and prosperity in the years ahead."

Secretary of State John Kerry, who was involved directly in the process of normalization taken on by the Obama administration, referred to that work in his statement.

"As our two countries continue to move forward on the process of normalization -- restoring the economic, diplomatic and cultural ties severed by a troubled past -- we do so in a spirit of friendship and with an earnest desire not to ignore history but to write a new and better future for our two peoples," he said.

Cruz posted a short message on Facebook, writing: "Fidel Castro's death cannot bring back his thousands of victims, nor can it bring comfort to their families. Today we remember them and honor the brave souls who fought the lonely fight against the brutal Communist dictatorship he imposed on Cuba."

House Speaker Paul Ryan released a statement saying that "the cruelty and oppression of his regime" should die too.

"Now that Fidel Castro is dead, the cruelty and oppression of his regime should die with him. Sadly, much work remains to secure the freedom of the Cuban people, and the United States must be fully committed to that work. Today let us reflect on the memory and sacrifices of all those who have suffered under the Castros," Ryan said.
Related topics:
abc newsnational
Copyright © 2021 ABC News Internet Ventures.
More Videos
From CNN Newsource affiliates
TOP STORIES