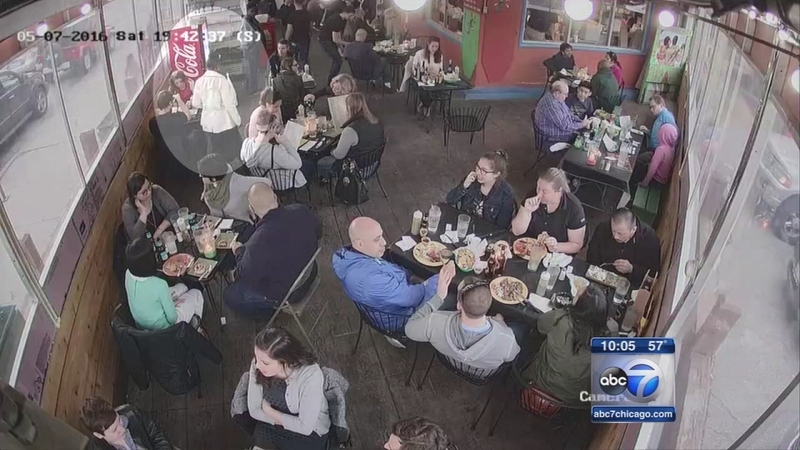 CHICAGO (WLS) -- A hostess at a Bucktown restaurant ran after two people who had walked away with a customer's wallet, but when she managed to track them down the real drama started.

Alicia Colon is a hostess at popular Costa Rican restaurant Irazu. Now she's being hailed as a hero after she chased down two thieves Saturday night.

The incident began inside Irazu, where surveillance video shows Darlene Henderson, 51, and Carl Hurn, 53, walking around, apparently waiting for a table. A few minutes later they are seated, but leave almost immediately. That is when the people at the table next to them realized one of their wallets was missing.

The missing wallet belonged to Ruth Nadonly's daughter, who was taken her mother and grandmother out for an early Mother's Day dinner. Before they knew it, Colon was taking charge.

"She was like one, two, three, boom, boom, boom," Nadonly says. "She knew right away they had stolen it."

"They actually had a bag with them. I saw them put something in the bag, but I wasn't sure, and seconds later they were vanished," Colon says.

Colon says she ran from the restaurant to the cab that the couple had just gotten into.

"So I pulled the door handle to see if it was open. It wasn't open, so I screamed, 'Stop, they just robbed this lady!' They get out of the car and the lady literally pulled up her shirt and pulled down her pants saying she didn't have it. Then, they started to run," she says.

Colon chased them down the block to Milwaukee and Leavitt, even after Henderson tried to hit her. By this time, several people had converged on the scene and called police.

"There was no way the man was going to give it up, but when the cops came and cuffed him they frisked him, they got it. She got everything back," Nadonly says.

Colon remains modest about her actions and why she would put herself at risk.

"I just felt like it was the right thing to do. I just wanted to help this lady out," she says.

The thieves were arrested and charged with felony theft. They appeared in bond court Sunday. They will have to face both Colon and their victim at their next court date on July 6.

There was only $120 dollars inside that wallet. The victim tried to reward Colon with some of that cash. She said no.